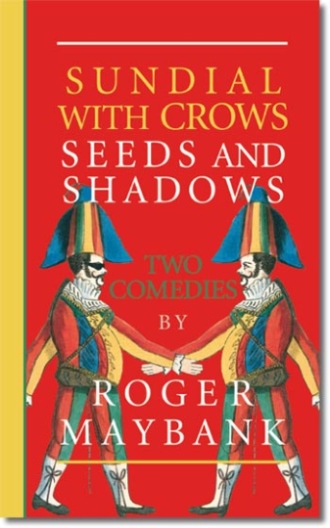 Sundial with Crows: In a bed raised above the stage, Zoe, a middle-aged woman remembers her childhood and youth, and knits images of it into a counterpane over-sprawling her body and the bed. Below her, on a rubble-strewn stage, Aaron, a middle-aged man, tries to keep on course the raft in his mind on which they are floating above a flood, towards the extinction of the world; 'helped' by Tom, a mute simpleton. Stage-front, in counterpoint, two warm-hearted but not very bright young men move back and forth, unaware of the others, seeking out the dragon which is terrifying the maiden they are sworn to rescue.

Seeds and Shadows: Four characters in cartoon white-face. A woman, Lena, sits stage-front, quietly looking out. Behind her, moving about, another woman, Poppy, waits for her lover, Raber (with wraparound shades), who arrives time and again from the trial she has put him to, bringing her fairy-tale 'boons'...a magic fish, wish-granting beans...she doesn't want; and so doesn't give him very much of what he wants, which is the touch of her body. Another man, Blue, sits alone and unmoving at stage-left, speaking in a gentle childlike way of his abandonment and frightening dreams. All the 'boons' Poppy receives she buries in the ground near him. Lena watches.

Born in Winnipeg and lived there for twenty years. No often since. After university in Britain, and some European wandering, he lived in Greece for some years, writing, mostly novels. Returned to Canada, to live on the west coast, and to write plays, and stage them.