A Matter of Conscience 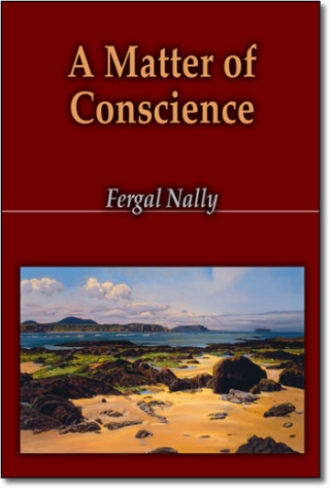 There is a fire in the research wing of the Cancer Institute that is attached to St. Mary's Hospital in Dublin. There is much destruction, which causes enormous upset to Dr. John Nicholson and his team. He suspects the Animal Liberation Front and asks them to justify their actions. There is no reply.

Events leading up to this follow, including John's early career in hospital medicine and his decision to specialise in cancer research. In spite of many difficulties he makes good progress under the guidance of Professor Wainwright. He develops a new drug, which appears to be effective in certain types of leukaemia and lymphoma. Inadequate funding, red tape, bureaucracy, misunderstanding and prejudice from colleagues confront him constantly.

Then circumstances surrounding the death of a young male patient with a mysterious illness dramatically change his career. He is obliged to leave Dublin and continue to work in the Helmuth Institute in Stockholm where he meets Linda Lindstrom.

Eventually, he returns to Dublin with Linda Lindstrom – now his wife – and takes up a position with Professor Wainwright again. Things, however, have changed in St. Mary's which disturb him greatly – not least the death of Nurse Diane Sutton. Diane had been a close friend before he left Dublin.

Other characters include Catherine Kennedy, the tragic ten-year-old girl whose fate is responsible for John's decision to specialise in cancer research, Professor Walter Wainwright, Head of Oncology in Trinity College Dublin – a man of little patience – who gives him enormous encouragement. There is Andrew Baker, the patient in St. Mary's who presents him with a dreadful dilemma over case management. Then there is the complex Lindstrom family with their own set of traditions and prejudices and Tom Nolan, the enthusiastic artist and animal rights campaigner, who causes havoc for John Nicholson and his team.

These events, together with Linda's illness, show the gradual development of John's character and eventually drive him to the limits of endurance.

The action is set in the early nineteen eighties up to the present and is located mainly in Dublin and Stockholm with journeys to Cambridge, Connemara, Rome and Cornwall.

Born in Dublin Fergal Nally is a doctor of medicine, M.D., and for many years was Head of a clinical department in the University of London and consultant to several London hospitals. Pain and cancer research formed a large part of his work and resulted in extensive publications in the scientific press. He is also a Fellow of the Royal Society of Arts.