America Uncensored - A Nation in Search of Its Soul

by Michael A. Nichols 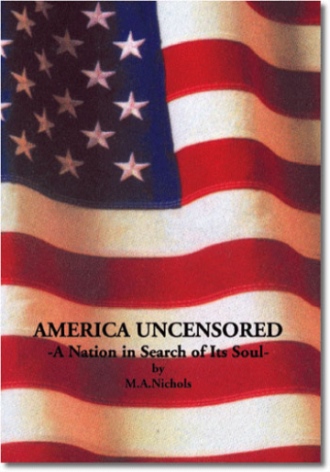 What if you discovered that the institutions you revere are facades for treachery and subversion? What if you found that the occupants of those bastions of Americanism were secretly and systematically restructuring the American society and its culture? What would you do?

America Uncensored - A Nation in Search of its Soul by M. A. Nichols is a story about the trials and tribulations of a boy growing up in modern America. The discoveries of Tony Todd, the main character, and his two closest friends, Dallas Austin and Gavin Habbishaw, put them in direct conflict with a hidden power whose source is unknown. While opposing this apparently evil force, the three comrades not only discover that a secret elite society rules modern America, they discover much about themselves and each other.

Dallas is the love of Tony's life. In following Dallas to a Fellowship at the Council On Political Studies. Tony's curiosity about the doings at COPS puts him and his friends in harms way. After being forcefully reminded that 'curiousity killed the cat,' Tony and friends bravely orchestrate an organized opposition to the machinations of their concealed antagonist.

As the three 'counter-revolutionaries' carry out their plan to neutralize the effects that their adversary has on America, they continue to stumble in the dark. At critical moments, however, they seem to get help from an unseen hand. In the end, all is revealed, at least to the reader.

America Uncensored - A Nation in Search of its Soul is a dark comedy. Many of the characters' experiences originate with the author, where only the context has been chanaged. Others come from research. Imagination provides the remainder. Authoritative references for arguments presented in this book are given their proper due when quoted or closely paraphrased. These citations are via the characters and assume their proper role within the context of the story.

The author, Michael A. Nichols, is a man of diverse interests. Educated and trained in electronics, business, pyshchology and history, he began his civilian career after being honorably discharged from the U.S. Navy in 1960. Initially engaged on the Atlas Missile activation program, he worked briefly on the Minuteman Missile program before moving to Northern California late in 1963 where he went to work for Pacific Bell. Finally retiring from a management position with AT&T in 1989, Mr. Nichols has since performed contract engineering work for several different companies in the telecommunication industry. Now semi-retired, Mr. Nichols alternates his time between work and recreational activities in the northwestern United States. His outdoor ventures include recreational gold prospecting, camping, boating, fishing and hunting.