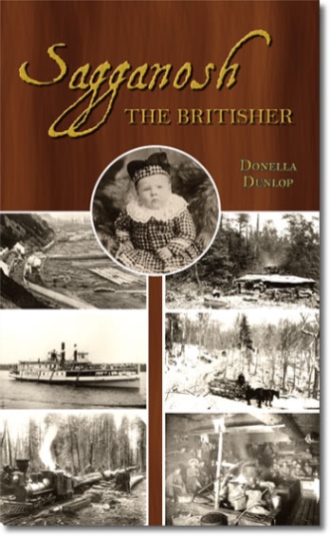 If the raconteurs of the Ottawa Valley, Ontario could tell but one story it would be the story of Sagganosh, the brash young Scot, Angus Dunkeld, who arrived, bereft of his Scottish inheritance, in Montreal Harbour in 1857. Angus intends to recreate a dynasty in the hauntingly beautiful and mysterious valley. He has no doubt that this will happen with great facility. But not before he faces a white-hot inferno on the steamboat, Montreal. Not before his attempts to carve from the pathless Upper Ottawa Valley wilderness a homestead present him with a crop of rocks. Children die. Rapids kill. But being a persistent Scot Angus plunges instead into the arduous life of the lumberman's shanty, where he is hated for his uppity ways and his very name.

Expecting help from his relatives, Angus faces indifference and hostility. He accepts as his due the kindness of strangers such as James Dunlop and James Carmichael despite attempts made to kill him. Disease, forest fire, wily Frenchmen; Irish rapscallions who do not know their place; Scots who do not appreciate him; Irish girls with voluptuous charms to offer; an Algonquin woman who is as lovely and elusive as the wind; Shiners; Grangers; and most of all a wonderful, mind enthralling, impassable River - all these and more Angus must conquer. Will he marry the languorous Maurie despite the fact that she is both Irish and Catholic and he a Presbyterian? What will the people in Pembroke and Bytown say? Will he escape the inexplicable malice of the French shantyman, Rene Perrault? And what of Rene's dusky Algonquin wife, Agwacone who knows that the Valley belongs to her people and Angus is only a brash interloper? And most importantly, who wants him dead and why?

The new Dunkeld Dynasty will be carved from the wilderness. But at what cost?

A must read for all who love the Ottawa Valley or stubborn Scots.

Writer, volunteer, teacher, artist, globe-trotter, Donella Dunlop has lived in Ottawa, Calgary, British Columbia, Germany and England, but her birthplace and her first love is the Ottawa Valley, Ontario. The Scots, Irish Dutch, French, and Algonquin of the Valley are her family. Her great-grandparents helped settle the valley, then a veritable wilderness. Their stories inspired this novel, the second about her beloved valley. Dunlop lives now in Manotick, Ontario, her children and grandchildren close by. She is at work on a third novel.