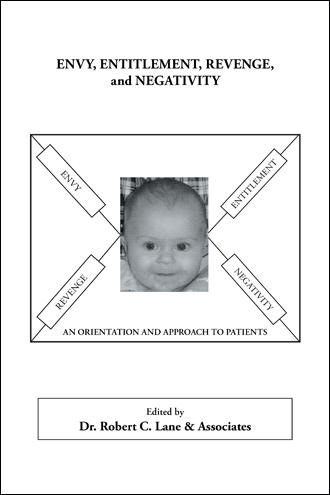 The book stresses the philosophy that revenge and negativity are the result of poor parenting. Mother, for a variety of reasons, is not available to the infant, and father is missing. The four conditions of the book title are related to the faulty parenthood as well as being related to each other. The first eight chapters present the author's orientation and philosophy. There are six chapters dedicated to the exploration of envy, entitlement, and revenge, followed by six chapters on negativity. The final chapter of the book ties the book together.

Dr. Lane has a long and distinguished career as a psychologist. He has been chief psychologist, coordinator of training, dean, and director of psychology at a number of New York psychological organizations, and consultant to a number of hospitals. He was Chief Psychologist of both the Westchester County Mental Hygiene Clinics and the North Shore Neuropsychiatric Center, the first neuropsychiatric clinic in Nassau County. In addition, he spent 10 years in government service, 4 years in military service in WWII as a psychologist and 6 years in the VA, 5 years as Chief Psychologist of the Psychiatric Section of the Psychology Department at Kingsbridge (Bronx) VAH, where he was in charge of 5 wards. He has been an APA member since 1944.

In addition to these achievements, Dr. Lane was President of the Nassau County Psychological Association, President of the Clinical Division of NYSPA, served several terms on the APA Council, and was recognized as a Distinguished Psychologist in 1984 by the National Academy of Practice.