To Rome and Beyond

With Our Story of the 760th Tank Battalion, WWII 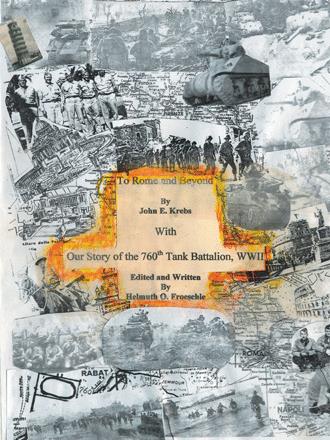 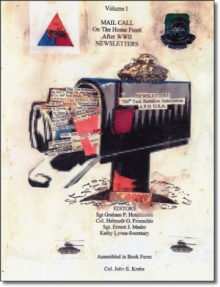 The first part of the book is a revised edition of To Rome and Beyond, self published in 1981 by Colonel John E. Krebs. The purpose was to have a combat battle record of B Company 760th Tank Battalion. The book was to be ready for the 1981 reunion in Denver, Colorado and was presented with great success although only 200 copies were available, orders were taken and more than 7000 copies were sold. At the Denver reunion the decision was made for the veteran members to begin gathering stories about their battle memories. Over the next several years the stories came in and Our Story of the 760th Tank Battalion WWII took shape. Colonel Helmuth Froeschle who was the last Battlion Commander as well as the Battlion Historian began putting Our Story together. The story was completed in 13 chapters in 2002, as I predicted previously, we now have a complete history of the 760th Tank Battalion. General Mark W. Clark wrote, "Your 760th Tank Battalion made a fine record for itself". Colonel Froeschle and I agreed these stories should be adapted and published in a book titled "To Rome and Beyond with Our Story of the 760th Tank Battalion WWII" This book is the factual account of firece fire fights with Tiger Tanks and the dreaded 88MM gun, daring patrols into enemy territory, momentary capture by German Soldiers during an artillery shelling, the anguish and sorrow of a comrade's death, the destruction of battle and the discomfort of the Italian winters with freezing rain and snow that turned battle terrain into a sea of mud.

Colonel John Ervin Krebs was born in Hachita, New Mexico on May 22, 1916. His Mother, Ennis M. Flanagan, was a rancher's daughter and his father, George W. Krebs, was a sergeant in the United States Army Cavalry.

George W. Krebs joined the Cavalry at the early age of 16 and served in the Philippines during the Spanish American War, and was later stationed at several Western army posts. Sergeant Krebs served with F Troop, 13th Cavalry regiment during the Mexican border incident. His mission was to capture Poncho Villa and his army. General John J. Pershing was the commander of the troops and Lieutenant George S. Patton was also there as an aid to the general. The author's father, Sergeant George W. Krebs, succumbed to pneumonia on October 1, 1918, during the devastating Flu epidemic of 1918.

The colonel's grandfather, James Ervin Flanagan, fought in the Civil War with the Confederate Army in Tennessee, Alabama and Georgia. He died in southern New Mexico in 1922 at the age of 88. His two uncles, Ollie and Beauguard Flanagan, served overseas in combat during WWI. They were both exposed to heavy gas attacks by the German. Uncle Beauguard died shortly after he returned from the war, and Uncle Ollie lived to the age of 87. It is believed that Colonel Krebs inherited his love and spirit of service to his country (in the military) from his father and uncles.

In the summer of 1922, the Flanagan family Ranch was sold, and with his mother, two sisters, and John moved to Odessa, Texas. His schooling began there in the first grade, and he graduated from Odessa High School in 1934. After two years of prep school and junior college, the author received a football scholarship to Texas College of Mines (UTEP) in El Paso, Texas, and he graduated in June 1940 with a BA degree in history, social science and geology.

Before graduating, all young men were required to sign up for the Army Draft, and the author was among the first selected. He entered the service as a private on January 17, 1941. He began basic training at Fort Bliss, Texas and was assigned to HQ Troop, 124th Cavalry Regiment, and 56th Cavalry Brigade. During March 1941, the Brigade was assigned the mission of guarding the border of Texas and Mexico along the Rio Grande River from Fort Brown to Fort Ringold.

In early June 1941, the entire Brigade, with all horses and equipment, received orders to participate in the Louisiana Maneuvers. The author was promoted to corporal and in August, the Brigade returned to Fort Brown without the horses. He was promoted to sergeant with assignment to a Scout Car platoon with orders to guard the border.

On December 7, 1941, the attack on Pearl Harbor occurred, and the author obtained orders to attend Armor OCS at Fort Knox, Kentucky where he received his commission as a Second Lieutenant. On June 1, 1942 he was assigned to the 760th Tank Battalion at Camp Bowie, Texas as a Tank Platoon Leader and was quickly promoted to First Lieutenant in August 1942 and assigned as Reconnaissance Platoon Leader for the 760th Tank Battalion. Soon alerted to overseas movement in November of 1942 he had undergone final training at Camp Pickett, Virginia and was soon deployed overseas. He arrived in Casa Blanca, Morocco in January of 1943. The men of the 760th Tank Battalion were among the first to enter Rome.

His assignments thereafter were as follows: 1. Assigned as 760th Tank Battalion Maintenance Officer in April 1943, 2. Promoted to Captain on June 1, 1943, 3. Assigned as Commander for Company B 760th Tank Battalion in which he lead Company B into combat for more than 300 days until March of 1945 with his return to the United States on March 16, 1945, 4. In May, 1945, he was assigned to the Armored Board at Fort Knox, Kentucky, 5. In August 1945, he was transferred to Fort Ord, California where he was assigned as Chief Test Officer for amphibious tanks, 6. He received regular commission until December of 1945 and resigned regular commission in January, 1947, 7. In 1947 he went into the Army Reserves with the rank of major, 8. He was assigned as Armor Instructor from 1947 to 1950, 9. He graduated in Advance Armor Class in 1950 with a promotion to Lieutenant Colonel in 1954, 10. In 1957, he graduated from the Command and General Staff College and was assigned as Chief Evaluator 6th US Army, 11. In 1959, he graduated from the Industrial College of the Armed Forces and in 1961 attended the Quartermaster School at Fort Lee, Virginia, 12. In 1963 he was promoted to Colonel and was assigned as an Army Reserve Commander at Fort Lewis, Washington, 13. In 1966, he was assigned to Reserve Chief Automotive Division Test and Evaluation Command at Aberdeen Proving Grounds in Maryland, 14. He retired in 1976.

Colonel Krebs was awarded the Silver Star for gallantry in action and the Purple Heart with Oak Leaf Clusters for seven wounds received in combat. Colonel Krebs currently lives in Scottsdale, Arizona.