A Study of Modern Money, Debt Slavery and Destructive Economics 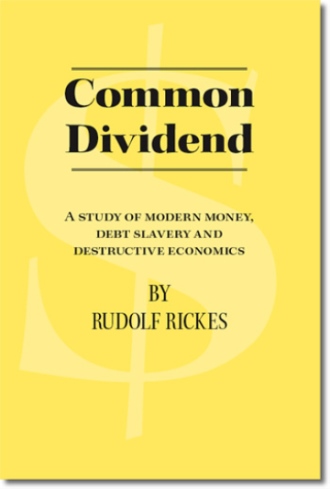 A study of modern money, debt slavery and destructive economics.

A sound and effective financial system. A various collection of articles an excerpts from Books, Journals and other Sources dealing with this subject.

A well researched account of Common Dividend, its implication or lack thereof to the civilized world.

To give an account of the Contents of this Pamphlet, selected Titles are given, not necessarily in any sequence: e.g.

The Money Myth Exposed
Why We Demand Common Dividend
A Dividend for Everyone
A Debt Money System
A Superpower Dominates Governments
The Blood of Economic Life
A Constitutional Monetary Power
Abraham Lincoln and John F. Kennedy
The Federal Reserve Act
A Lesson to Learn
Thoughts About Unemployment and War
The Nature of Credit - Sacred and Profane
What Do We Mean By Real Common Dividend?
Objection: Communism
Present Taxes Are a Robbery
Guernsey's Monetary Experiment
The Young People Want a New Financial System
Social Credit, For A Healthy Economy
Toward Social Credit by Apostolate and Tenacity

I was born on August 3, 1920 in a small farming village close to a large city in the Rheinland of West Germany. Together with my brother, born a year earlier and my first sister, born four years after me, we were three children.

My Father was working as a craftsman in a company near the large city. With 6 years, I was enrolled in a public school, which I completed 8 years long with good report cards in 1934. After my discharge, I joint a company and became an apprentice for 4 years to learn Tool and Die making and received my diploma as a skilled craftsman. In the fall of 1940 I was drafted in the German Airforce and trained for 3 months on light antiaircraft guns and further 3 months training as a maintenance man.

After my discharge I was sent to occupied Norway, where I remained until my discharge from the British Army n the spring of 1945 as a constable. The war was finished and the civic damage was severe but I was not dispirited and found work in my profession with my former company. To improve my knowledge and climb-up the ladder of success, I took every opportunity which came my way and enrolled for two years in engineering studies on week ends and after that, on e year every weekday evening classes in production control and time study, both with diplomas. As a result of that, I could change my job and work as a design draftsman in an engineering department.

In the fall l of 1959 I proved my luck and immigrated to Canada with almost no knowledge in the English language. But I was lucky, I found a job as a machinist in a small company, learnt in the evenings in special classes English and answered an ad in the newspaper for an engineering technician. I got the job and stayed in this company until my retirement in 1985. I was first design draftsman and later the manager of the planning department.

During the years of my work, I experienced the "Social Problems" around me, which led me to the conclusion to write about it. In 1998, I bought a computer and learned to use it. I wrote first in German the Book "Der Glaskafig" and later "Soziale Gerechtigkeit" which were published in Germany. A professional translator translated "The Glass Cage" and "Social Justice" to English. The other Books I compiled later from newspapers and books, their titles are," Common Dividend" and "Remarkables".