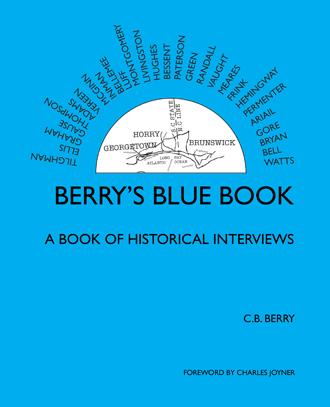 Burgin Berry has interviewed people of the Grand Stand and other Carolina areas for more than fifty years. An early copy of it was placed in the Conway Library and many people requested that it be published. The South Carolina Historical Society reproduced an early version of it in microfiche.

Connelly Burgin Berry (known as Burgin) was born in Anson County, North Carolina, November 12, 1919. His family moved to the Sand Hills of Chesterfield County in 1925 and lived there until he graduated from Cheraw High School in 1937 at which time they moved to Horry County.

Burgin graduated from Southeastern Commercial College in Florence South Carolina, in 1939. He enlisted in the Navy in 1941 and served for 42 months, principally on recruiting and induction duty in Columbia, South Carolina. While in service, he completed Civil Engineering and Aircraft Drafting courses at the University of South Carolina.

In 1945, he returned to what is now North Myrtle Beach and operated a lumber planning mill and concrete block plant for the next twelve years. In 1957, he became a registered land surveyor and continues to work in this profession today.

When Crescent Beach was incorporated in 1951, he was a charter member of the town council and was elected mayor in 1956 and later, in 1966. He was the last mayor of Crescent Beach when the town was joined with three other municipalities to become North Myrtle Beach.

In 1965 he was appointed a charter member of the Horry county Historic Preservation Commission and served as chairman of that group. This commission formed the Horry county Historical Society in 1966 and Berry served as the first president. He was awarded the Ernest Edward Richardson award for his service with the society which created and published the INDEPENDENT REPUBLIC QUARTERLY under his leadership.

In 1972, Burgin became chairman of the Vereen Gardens at Little River (a 120 acre park) where he still serves today. In 1988, he was awarded a citation for his preservation activities with the gardens by the D.A.R.

While serving with the Horry County Historical Commission, he was instrumental in establishing the Horry County museum and in 2003 he was awarded a Founders Day certificate by the museum board of trustees.

He has written extensively in many publications and since 1990 has written a weekly history column for the SUN-NEWS. In 1999, he was awarded a certificate for his contributions to the preservation of Southern history and culture by the Waccamaw Center for Coastal Carolina University.

He is married to the former Dallas Wallace of Columbia and they have three daughters and five grandchildren.