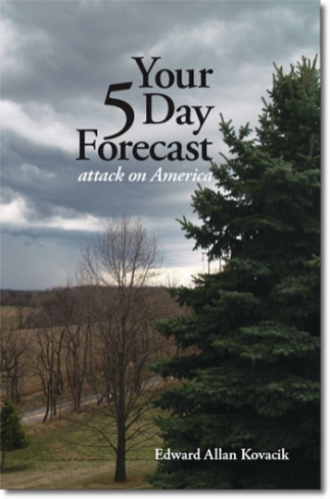 Your 5 Day Forecast is a tale about a rogue group of Islamic Extremists that have developed the ultimate weapon of mass murder. This new weapon, a deadly biological agent that was genetically engineered from a primitive life form, was acquired from the U.S. Space Agency by a young Arab while he attended graduate school in the United States.

The story opens with a news report summarizing events following the September 11, 2001 terrorist attack on the United States. The reader is then taken back in time and travels to Eastern Europe with two of the key actors - Tom and Colleen Berchesic where they, by chance, meet Professor Bernard, an American researcher on bioterrorism, and Hasim Bodar, an old college friend of the Professor. At this point in time, neither the Professor nor the Berchesics know of Hasim's secret - he is a member of the al Dil Ion terrorist organization that is headed by Mohammed bin Baddul, and it is Hasim's responsibility to develop the deadly weapon.

Key events, such as; Exercise Dark Winter, a war game on bioterrorism, and Mars Polar Mission, a NASA space expedition to the Red Planet, provide personal backgrounds of Messrs. Bernard and Bodar, and their roles leading up to the impending biological attack.

Several planning sessions held by the al Dil Ion organization in the mountains of Afghanistan and Pakistan present the reader with intimate knowledge of the genetically altered bacterium which will be the terrorists' mass-killing agent.

Specific details of the weapon's delivery mechanism are not revealed until later chapters, adding a great level of suspense to the story.

A fast-paced, powerful, and surprise ending will leave the reader with his or her own interpretation of the terrorists' level of success.