The Tao of Poetry 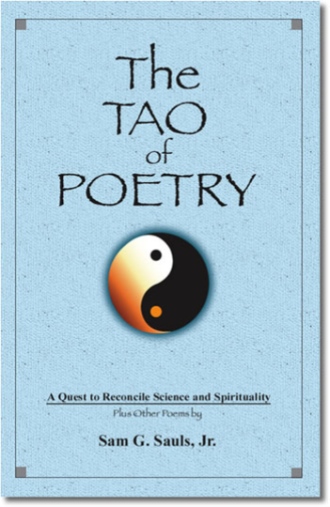 Sam G, Sauls, Jr. is a 77-year-old retired graphics designer who has studied about science and religions over his lifetime, and written poems that were seeking common ground both spiritual and more rational seekers could believe in. He realized monotheism and modern science were on widely divergent paths and not reconcilable. After attending a theosophical conference conducted by a quantum physicist he learned that Fritjof Capra's book, The Tao of Physics, said that Eastern mystics were talking like quantum physicists 2500 years ago! This inspired Sauls to name his book The Tao of Poetry in Capra's honor. It was the Tao symbol with its yin and yang unions of opposites in total Oneness that fit the hidden realities and mysteries that he sought to express, for in 1985 he had an epiphany that proclaimed "All is one, All is well" and that enlightened statement apears frequently in his poems.

Humor, sarcasm, mystical insights and Ancient Wisdom are used to proclaim the truths that he feels come from his higher Self. He includes a few poems placed in separate categories of Questions, Old Memories, Prayers and What The Future Holds. His Unitarian Universalist minister based a Sunday morning service upon his poems and connected them with appropriate music.

Concerning his insights, intuitions and signs received about the future, a quote from Emerson's essay on poets seems appropriate: "The sign and credentials of the poet are, he announces that which no man foretold. He is the true and only teller of news, for he was present and privy to the appearance which he describes. He is a beholder of ideas. An utterer of the necessary and casual. For we do not speak of men of poetical talents, or of industry and skill in metre, but of the true poet..."

The poet is a great-grandfather, artist and seeker of truth who writes creatively using humor, sarcasm and ancient wisdom. He could also be a prophet according to Emerson's description of a poet. As a member of a Unitarian Universalist church, the Theosophical Society in America, the Institute of Noetic Science, Edgar Cayce's A.R.E. and Ken Wilber's on-line Integral Institute, he is an open-minded liberal and proud of it.