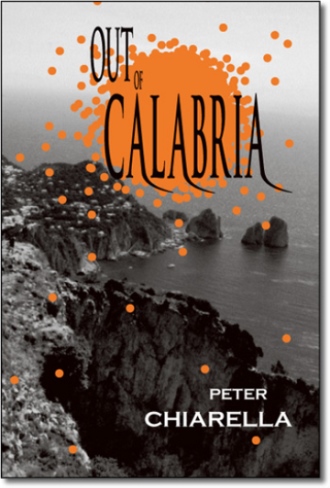 Out of Calabria is the story of a privileged Calabrian family that emerged from poverty by a circumstance of war and the unswerving fortitude of one man; and of how the young women of his family refused to bend to the mores and traditions of the times, pitting them against their social order and their own father. Caterina and Concetta Zinzi each rebelled against their famed and highly esteemed father when he attempted to force the traditions of the times upon them, arranging their marriages to men of his choosing, based on dowry and family background. Raised as high spirited and independent women, both daughters sought out the men of their own preference and forced their will upon their controlling father. The doggedness of their pursuits resulted in their decline in social status and their eventual emigration to the United States.

Caterina's attraction to a handsome field hand leads her into heated disagreement with her father, who is bent on marrying her to a man of wealth and promise. Moreover, he harbors a secret about the man she loves that would never allow him to be accepted into the Zinzi family. Concetta's man, also of very modest means, is required by his greedy family to marry an elderly rich woman, forcing him into an unhappy and faithless marriage; and, eventually, to a bigamous relationship with Concetta. To escape the influence and outmoded customs of Calabrian society, both women find that they must leave Italy. There, they experience the travails and attainments of Italian immigrants in turn-of-the-century America.

It is a story of contradiction, of rebellion by women in a society that presumed their obedience and adherence to tradition. And, it is a story of the enormous love that is possible between a man and woman, when they forsake everything to be together, flouting tradition in the face of disgrace and family disharmony. It is a story from out of the past that is relevant even today. Taken from real life occurrences in the author's ancestral maternal family, it is reminiscent at times of aspects of Melania Mazzucco's Vita and the coarse brutality of Upton Sinclair's The Jungle.

Peter Chiarella started life in the Bedford-Stuyvesant section of Brooklyn in 1932. He was educated in the public school system and at St. John's University. Retired from the corporate world, Peter lives in Napa, California and enjoys the life of a gentleman farmer as a wine grape grower and vintner. He is married and has four children and two grandchildren.

The author's mother was born in Calabria, but was brought to America as a toddler when her mother died from an illness brought on by childbirth. She became the ward of her Aunt Katie, the principal character in Out of Calabria, and grew up in the Lower East Side of Manhattan. Just as Peter's previous book, Calabrian Tales, recounts unforgettable stories about his paternal roots, Out of Calabria recounts his maternal roots with powerful stories revealed by his mother and other family elders. Unwittingly, the two books reflect a very early feminist daring that impacted future generations of the family.

For as long as they can remember, the author and his brothers heard these stories at family gatherings and soaked them up like the gravy of a Sunday meal. Knowing Peter's love of history and of all things Italian, the family encouraged him to take on the task of writing two historical novels, reflecting on the struggle and compromises that past generations of his family endured in turn-of-the-century southern Italy and America. At times you will have to remind yourself that these are true stories with real people.