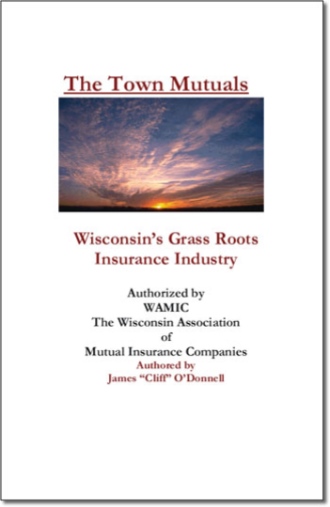 Pioneers determined to carry their own financial load. Pure insurance by financing each other's financial catastrophes. These farmers, in a state just ten years of age, gave birth to the concept of assessable insurance in their townships. These farmers learned the business of taking each others losses and spreading them throughout their membership.

James “Cliff” O’Donnell was born in Chippewa Falls, Wisconsin on May 17, 1934. He began his career in the insurance industry at Metropolitan Life. After seven years serving life insurance policyholders in Milwaukee WI, he returned to Chippewa Falls at the age of 29 where he began his town mutual career as an office manager at Eagle Point Mutual Insurance Company. Following his father’s retirement, he was elected to the Board of Directors and became Secretary of the company.

While living in Chippewa Falls, O’Donnell was active in many civic organizations including the Jaycees, Kiwanis, Chippewa Falls Board of Education, the Industrial Development Corporation, the Chamber of Commerce and the First United Presbyterian Church. In December of 1966 he was appointed to the board of directors of Wisconsin Town Mutual Reinsurance Company. In 1968 he was elected President of the Board and held that position until 1982 when he became President and CEO of a reorganized and renamed Wisconsin Reinsurance Corporation.

His awards include being named one of Wisconsin’s Five Outstanding Young Men, WAMIC Man of the Year, NAMIC Merit Award, NAMIC Service Award and a Citation from Governor Tommy Thompson presented at his retirement by Commissioner of Insurance Connie O’Connell citing him for the Demutualization of Wisconsin Reinsurance Corporation and the founding of 1st Auto & Casualty Insurance Company.

O’Donnell’s professional life was dedicated to the modernization of the Town Mutual Industry. As CEO of WRC he directed the de-mutualization of the Company to a stock corporation and its capitalization of nearly ten million additional dollars in preferred stock sales, and the institution of 1st Auto and Casualty Insurance Company. His accomplishments were capped in 1994 with the erection of the current home office at 2810 City View Drive in Madison, Wisconsin. O’Donnell retired in 2000. He now enjoys time at home with his wife, Donita, their seven children living throughout the country, and a growing brood of twelve grandchildren. He can be contacted on the web at: ceocliff@hotmail.com.