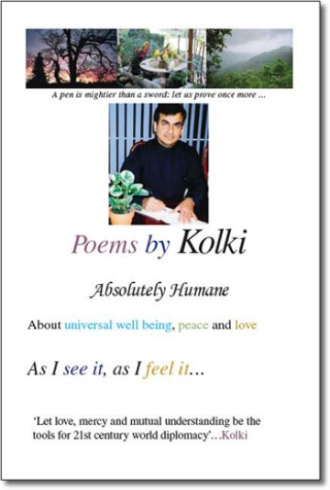 Poems are as ancient as history!
As humans evolved with hymns and chanting
Teaching generations with sounds romantic -
From basics to philosophy to meta-physics!

But it rises against oppression and injustice!
Brings people together for change productive
As it stanzas act like missiles for peace -
Resurrecting universal love, truth, and justice!

In this vast universe
Among seemingly infinite space and distant stars
I am the living Planet Earth
Revolving merrily as family around my star, the Sun!

I have been living for ages caring for millions
Mineral, oil, gas deposits act like my organs!
My soil is fertile to satisfy being of all forms
Plants, insects, birds, and animals!

My oceans are mechanisms for atmospheric balance
Ensuring a predictable life support system immortal!
While most sentient being respect my natural order
Humans need mining, drilling, and logging, for life and culture!

But the entrepreneurial ambitions for material gains of lust
Resembling my existence as decapitated body parts!

It is time for humans to understand -
Thousands of years prepared my body for genetic evolution
Soon to be hostile place to live for generations!
That time may be running out to fix my scars from self healing
Making me slip/wobble during daily spin
Producing unpredictable day, night, and seasons!

Oh mighty pine –
You were born to live long with pride!
Having grown from a small cone with head high
Surrounded by family or alone in countryside
Withstanding droughts and fires, storms and cold nights
Enjoying snow, rain, and sunshine
Sheltering birds, insects, moss, and vines
Watching sunset and sunrise
Staring at the stars in dark night sky
Wondering about phases of moonlit night
Bathing in dawn’s early light
Witnessing time passes by with season’s rhyme
Hearing cyclic stories of deciduous nearby!

But without knowing –
You would be terminated depriving long natural life
Along with all supported insects and vines
Leaving birds homeless without shelter so cozy and high -
As logger’s saw would cut through rings without a sigh
Selling body parts for lucrative civilized sites
Making mulch from your branches so full of life
Fowl smell would replace enchanting odour of pine!
Some will protest quietly, a few may cry
Consoling with hopes you left some cones in the wild!

I will protect siblings growing in yard with smile
As long as I can raise my head high!

Let love, mercy and mutual understanding
Be the tools for world diplomacy!
Bridging all the gaps and barriers
Created by military dominance and supremacy!
A pen is mightier than a sword!
Let us prove once more!
A mind above doubts and fear -
Can break the ice, ‘status quo’, forever!
A heart which eager to love
Can win enemy as friends!
The ears which are ready to listen
Ignore all strategic military intelligence!
When arms are ready to embrace
Thoughts are energised in optimism!
All human problems find solution
In honestly brokered communication!

I apologized, sometimes in silence often aloud,
Every time an animal was abused or slaughtered
A fellow human was tortured or murdered
Military invaded foreign lands as destructive power
Family homes demolished by missiles and bulldozers!
I apologized, before mowing lawns and trimming shrubs
Being unable to help a pet scared looking for owner
Unconsciously acting rude or unwelcoming to others
Seeing people in need suffer cold Northern winter!
Whenever I forgot, thorns poked me as reminder!
I apologized for my indifference during daily chores–
Whenever elected officials appeared lying under oath
Leaders justified missiles and troops bypassing votes
Loggers got new license to cut more old growth
Free trades forced citizens out of dear cozy homes!
I apologized –
When allied power used sanctions for military might
A patient suffered uninsured in silence all night
A child couldn’t attend school in ghettos out of sight
Dinner has been served but many starving nothing to bite
Governments get hijacked by media, intelligence, and elites!
If one needs reasons to apologize –
There are millions to maintain status quo of our way of life!

The bell rings each morning -
Except on weekends or holidays!
Signaling the opening of the market -
In the heart of most crowded cities.

Traders rush in to make their bids (day) -
As millions of shares change invisible hands!
Making it a bull market or bear market -
Just like the happiness and sorrow of life!

The market grows on good ROI (return on investment) -
And shrinks when workers salaries go high!
The market hates full employment -
Fearing inflation may rise!
And it loves underemployment -
When workers work for less with a smile!

Politicians always worry about the market -
With economy and election in their mind!
They are always there to guard it from all evils -
Like a mother of a newborn child!

Human brain needs a steady pure blood supply -
Even a computer requires a stable power intake!
But, the fate of democratic free market must comply -
With an uncertain, volatile and ambiguous stock market!!

Poems by Kolki (Deepak Sarkar) is a book of thoughtful poems written from realizations toward achieving a peaceful and co-excisting heaven on Earth. These poems are about universal well being, peace and love, as perceived by the author, a dual Canadian and American citizen originally from Kolkata, India, throughout his life and during years of renunciation phase - revisiting world history and religion without pre-conceived notions!

The scientific and extensive corporate knowledge blended with an artistic global mind toward universal love and craving for long lasting peace in an egaletarian world resulted in many unique poems in almost all aspects of life including philosphical, political, economical, social and romantic. Thus re-establishing truth is the basis of many poems including epic poems like 'Jesus', 'Palestine', 'Illegal Immigrants', 'God' and 'Universal God'; while fresh original thoughts created poems like 'Democracy', 'Participatory Democracy', 'Universal Super Power', 'Silent God', etc.

Overall, the book has poems for almost all audience with positive outlook of enlightenment - be it for love, peace, politics, philosophy, social or economy. Many poems are inspirational while others are informative and solution drivien! As commented by eminent historian and scholar Professor Mansura Haidar of Aligarh University 'It was always refreshingly pleasant to go through your new creations. It is indeed nice to hear that you have thought of publishing the entire collection so that one enjoys the beautiful contents in continuity and if possible in one go. The themes are so relevant to present day. Let us hope it is just the beginning'.

A dual Canadian and American citizen was born in Calcutta, India, on October 17, 1954. A writer, composer, music teacher and performer, besides a Professional Engineer, MBA in Telecommunications Management and Ph.D. candidate at the University of Victoria, British Columbia, Canada.

A converted Vegetarian who believes in non-violence and peace can be achieved throughout the world without military strategic interests while visualizing collateral damages as real death and destructions.

Brought up in Southern Calcutta was always keen to know and learn about the people and their real condition. A nature and animal lover who maintained his faith in universal well being throughout the career. Travelled extensively in North America and India as well as visited many foreign countries in Europe and Asia.

Wrote many peace related articles since 9/11, 2001, which can be accessed online via his poetry WEB Site: www.kolki.com

Many poems by Kolki had been published in the International Society of Poets anthologies including 'Immortal Verses' and 'Secrets of the Soul', News Media and journals around the world, as well as part of Noble House collections like 'Colours of the Heart' and 'Theatre of the Mind', some winning awards!

'Let us not waste any more time hunting for virtual terrorism! The whole world is hungry for peace and democracy achieved through mutual respect and understanding, not using bombs and missiles. War divides and destroys people and civilization, animal and environment, as the ultimate weapons of mass destruction'... Kolki.