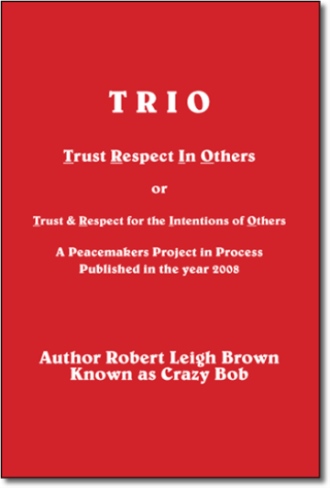 Crazy Bob Brown has a concept that he is using in his attempt to bring Peace. I am not certain as to your religious beliefs but I'm guessing you are a Christian. This concept is called TRIO based on the spiritual belief that there is a Trinity made up of God/Dad, Jesus his son and a individual called the Holy Spirit or Ghost and the possibility of a spiritual eternity for humans that transcends physical existence.

This idea separates humans from mammals and other organisms whose physical existence is dependent upon Mother Nature's mutations that started with what is called the Big Bang whenever time started with the so called formula of existence known as the theory of opposites. Someday I hope a Second Bang.

What I am trying to prove is existence can have various percentages of opposites, that good can be 99% and evil 1% in a place called Heaven which is the eternal goal of we humans. But of course it could be the opposite a place called Hell depending on CONTROL, who controls POWER at what time, what year and how much?

In my workbook that I've given you is a prediction of our future when 2 events are very important globalization of government and birth control to avoid impossible population growth and starvation. Of course the mentality of humans may find other galaxies for survival this I cannot prove but someday will be a must because this Earth is dying. WHY am I caring on like this? Because 2 organizations I adore the Methodist Church that allows agnostics and the breeder of good neighborhoods Kiwanis. I want both of them to survive which they can based upon using the TRIO concept. I am asking both of these organizations to base their membership on this and keep singing harmony the essence of human eternal existence. Make sure there are songs sung at their meetings that prove human spiritual existence. Singing is vital, proof the success of the Mormons.

Perhaps you have different or better ideas than mine, write them in the book and return it to me.

Bob Brown born in Buffalo NY in 1915 the year Allen Browne started Kiwanis. Son of Sarah Fern Barber whose Mother Elizabeth in Elmira NY sat on Samuel Clemens lap while he told Mark Twain stories and was in the family bloodline of Charlie Chaplin and she sold pianos door to door for a living. Grandma lived with her son-in-law Leigh Alvin Brown on Parkside in Buffalo. Mrs Sarah Fern Brown went on to live in NYC with her husband Leigh when he was President of the Iroquois Gas Company in Buffalo and later National Gas with offices in the Empire building. She served on the National board of the Salvation Army went to Methodist Church on Park Avenue sat beside JC Penney. Leigh was a participant in design of the pipelines from Texas to Boston that went over Snyder Hill near where Bob and Bess lived. There was a pumping station in Ellis Hollow with in 2 miles of their home. Leigh also contrived the gas pipelines from Alaska through British Columbia down to Fort Erie across the Niagara River into Buffalo. In those days ditches were dug by hand by Cattaraugus Indians specially gas lines from the oil fields near Jamestown. Leigh Brown greatest connection was he graduated in 1912 from CORNELL, in Civil Engineering, his name appears on a plague in second floor hallway of Day Hall and in "Who's Who". As the father of Crazy Bob he attended football games where UB against Niagara University they shoveled snow from the field to see the lines and Bob while sitting on the bench was punctured by an 3 inch wooden sliver acquiring the name of "Slivers Brown". Dad Brown was instrumental in Bob's athletic connections to Coach Yost at Bennett High and his transfer from UB to Cornell and later while Bob was in Sampson Navy Training Eddie Yost of the Washington Senators was in the same company. Sport of baseball was part of his life as Bob was Coach of the boys on Snyder Hill. The other connection was coaching football in Ithaca, in Florida at Riverdale and Lehigh created a sense of what that Sport was all about. While at Cornell Bob played opposite All American Jerome Brud Holland. One of the boys on Snyder Hill was Peter Norton who ended up in Seattle Washington heading up Norton Computer Virus Company. His father was a Professor in the Ag School at Cornell specializing in pesticide development and Shirley Fonda (Kin of movie Fonda's) Brown worked for him, the mother of grandson Ken Brown who was in Desert Storm and presently works at the Hippodrome Theater in Gainesville, FL. Brothers Gordon and Paul served in World War 2 and sons Ben, Bruce and Budd were all in the Armed services later, so Bob as a Veteran member had a very unusual experience in that War which he has written about in his 3 books - "Bobs Crossing Christ and Cornell", "Peacemakers Altruism Manual" and "TRIO". After the War Bob ended up as Assistant to the Comptroller of Cornell University in charge of 82 million annual payroll that paid men like Hans Bethe, physicist in charge of atomic bomb testing and Carl Sagan, Astronomer - Voyager projects, plus many while in Lehigh, more great scientists like Brigadier General Ray Jenkins, Tennessee Heavy water scientist Ray Moore, Chemist Ben Kiff and Vetinarian Charles Coy along with Methodist singers like Mike Canada, Glenn Quam, Bob Clark and other Barbershoppers like Sam Feinstein and Ralph Boettger Sr. compose great minds that have affected Bob Brown's Trio philosophy.

At the same time all of this was happening the family of Bess Chloe Honness, Bob's wife were involved due to her working at Cornell in the Housing department when Bob was a student and after their marriage their life together on Snyder Hill on property given to Bob by Chet Honness, Bess's older brother their lives were intertwined. When Chet and Helen moved to Lehigh Acres, Florida, they invited Bess and Bob to buy a lot close to them sight unseen. In 1978 Bess and Bob moved to Lehigh Acres became involved in the Methodist church together and made many friends like the Farleys, the Grables and others.

But most of all the Honness family - Alice, Ann and Bess trio singers who were invited to sing with Glenn Gray's Casa Loma orchestra and our neighbors on Snyder Hill, all singing songs of JOY - Jesus first, Others next and Yourself last make for what is today the Happy House where Crazy Bob's computer spells out his thoughts both good and bad, in this year 2007.

Notice how the ability to sing is the basic power element that makes humans spiritually capable of reaching eternity.

All of these reasons contribute to why Bob desires to be buried in the same cemetery as Helen and Chet are in Lehigh Acres, Florida.