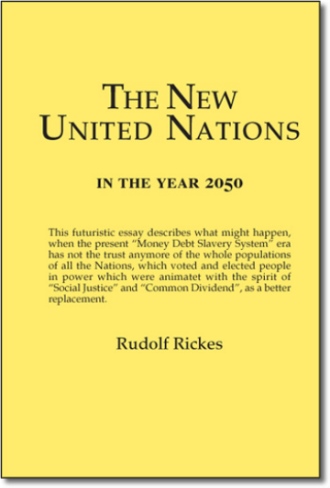 The New United Nations was created because we think that our role is, above all, to show what men must get from their economic activities and get out of the financial rut into which individuals and governments are groaning during the last decades. But we advocate which seems to be more practical, less disconcerting way, to serve the most people of the lower classes in need.

Rudolf Rickes was born on August 3, 1920, as the second son of a labourer in the industrial center of western Germany. After completing public school, he worked and studied to obtain a Machine Design diploma, and later became a Mechanical Technician and a Time Study Specialist. Through his work, he became aware of today's accelerating technological advances and their infuluence on the average person.

Experiencing great poverty himself in his early years, Rudolf was receptive to the ideals of socialism in its ethical and noble form. He devoted much of his free time over the years to study the subject. As a member of the Pilgrims of Saint Michael in Rougemont Quebec he received their newspaper, "Michael", that, while dealing mostly with religious subjects, contained many articles on socialism, economics and the debt slavery inflicted by the ruling elites of the world. As a solution , the newspaper advocated the idea of "social credit" which was developed and propagated by the engineer C.H. Douglas with the aim to supply goods to those who need them. It condemns the economic system where the money supply is created by the banks with the interest bearing, promoting instead a system where the government pays every citizen a monthly sum to remove the division between the rich and poor. These ideas inspired Rudolf and remained a domineering force in his life.

After his retirment, Rudolf wrote essays on the subject, including The New United Nations in 2050, which is a collection of thoughts on what might happen if the present money monopoly and debt slavery were abolished and replaced with a social credit system by 2050. The essay was above all to show what men must achieve from their economic activities and to remove them from the financial rut that individuals and governments have created.

Rudolf currently lives in Mississauga, Ontario with his wife. He has two children, five grandchildren, and two great-grandchildren. He continues to advocate the ideals of social justice in service of the people of the lower classes.