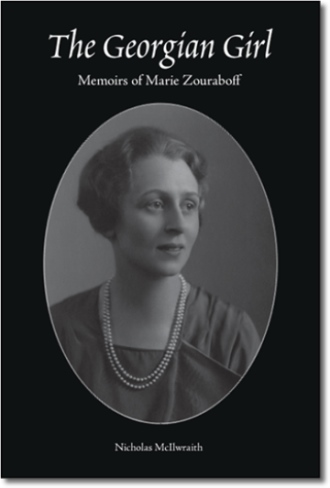 Marie Savory, nee Zouraboff, was born in Tbilisi, Georgia to a prominent Georgian father, a world-renowned civil engineer, a General of the Russian Army and a Privy Councillor of Tsar Nicholas II. Her memoirs tell of her early life in Georgia and her move to Siberia while in her teens.

She enjoyed a happy childhood until the Bolshevik revolution, which swept across Russia from west to east. From the age of 16, she and her family were on the run, narrowly escaping death on several occasions. She describes the train journey from Irkutsk to the end of the line at Vladivostok, always just a few miles ahead of the approaching terror.

Once they reached Vladivostok, various military missions based there provided some degree of safety, and Marie and her sister enjoyed a new and amusing social life among the dashing young officers of the British Mission. But as the Bolsheviks approached, the military missions were packing up to leave. Once again there seemed to be no escape, but, when the situation became desperate, friends in the British Mission managed to get space for her family in the lamp room of a rusting freighter, which barely survived a typhoon in the East China Sea.

She relates the difficulties of adjusting to the status of a refugee at a time when no help was offered and there were no social safety nets. Marie’s continuing adventures span the century and include a time in Paris, some years in the United States during the roaring twenties, a return to Europe and to married life in England, and then World War II in which she played an active roll in military intelligence.

A move to the United States in 1949 brought a reunion with her sister and mother, who were then living in Pennsylvania, and her son who was at university there. In yet another reinvention of herself and to survive financially, Marie trained as a nurse and tells of her experiences as a private duty nurse in New York and San Francisco. She returned to England in 1961 and a few years later was introduced to the Captain Reginald Savory, who had helped her escape from Vladivostok. Now a retired General and recently widowed, they married in 1968.

Nicholas McIlwraith was born in London, but emigrated to the United States at the age of 17. After a career as an Aerospace Engineer, he qualified as a lawyer and returned toÊEngland in 1981. For the next 27 years he lived and worked in London, but recently moved to Norfolk where he lives with his wife.