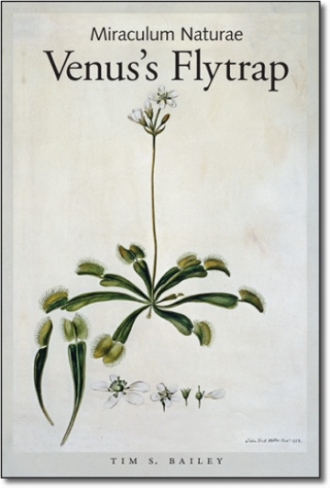 "The most wonderful plant in the world," "astonishing production," "faculties eminently superior to every other vegetable production," "the great wonder of the vegetable kingdom," "miraculum naturae" – just a few historic words used to describe Venus's flytrap, words not out of place today.

It was Arthur Dobbs (1689-1765), Governor of North Carolina, who first made the plant known to botanists. In a letter to the English cloth merchant and naturalist-collector Peter Collinson (1694-1768), dated 2 April 1759, Dobbs writes:

For the first time the story of this unique plant, its Culture, Natural History and early Botanical History, is told in a single book.

Set forth are the techniques used by the most experienced, seasoned and successful growers. Whether it's winter, spring, summer or autumn, you'll know what to do, when and how.

An informative explanation of the plant's taxonomy, morphology, distribution, habitat and vulnerability is given, with an in-depth look at the mechanisms behind trap closure.

An authoritative account of the plant's early botanical history is presented. Read about its arduous journey from North America to England, how it came to be called "Dionaea muscipula" or "Venus's flytrap," and the mischievous truth behind the peculiar name "tipitiwitchet" given to the plant by American naturalist John Bartram (1699-1777). A fascinating and intriguing story, it is augmented with biographical memoirs of the eighteenth century naturalists and botanists who shaped the plant's early history.

Tim Bailey started his education in horticulture at a young age, encouraged by his father, and with it developed a lifelong interest in the natural world. His attraction to carnivorous plants, and in particular Venus's Flytrap, stems from the odd plant his father kept. But it wasn't until 1989 the he was able to readily pursue his interest in these fascinating plants, plants that have turned the natural order of the living things on its head in feeding on animals.

From 1989 Tim grew a variety of carnivorous plant species wherever he could, until establishing a settled, modest collection in Exeter, in 1993, shortly after graduating with a degree in Environmental Science from the University of Plymouth.