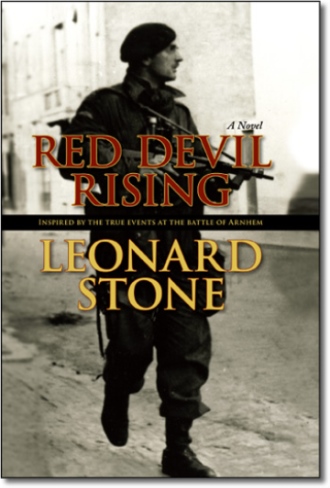 The character David Gibson through whose eyes most of the story is told, is based on the recollections of a British airborne soldier. We see and hear him and are privy to his thought throughout the battle. But unlike him, we know what is going on in the enemy's camp as well, and at the end, readers will ask, what would I have done?

In September of 1944, ten thousand airborne soldiers came from the sky to secure the Rhine River Bridge at Arnhem, Holland. Two thousand returned, many believing they had been sent on a suicide mission by leaders blinded by a sense of their own invincibility. Their stand at Arnhem, against overwhelming odds, is still considered on of history's most heroic military feats.

Red Devil Rising encompasses the range of human feeling from the arrogant tot eh simple, from the strategist to the mud and blood soaked warriors, both German and British who killed each other separately, or schemed to save each other. Ironically, one side fought because they wee doomed: the other for the glory of their last victory.

Leonard David Stone was born and educated in Winnipeg Canada and now resides in Tampa, Florida. He holds degrees in Fine Arts and Education, and taught at the high school level; however, his long-time professional career had been in arts administration, having managed symphony orchestras in the United States and Canada. He lived in Arnhem, Holland and London, England in 1956 during which time he developed his earliest research for the novel Red Devil Rising including face-to-face interviews with many real-life characters in the novel. Since then he had maintained a keen interest in military history, principally the WW II airborne drop known as Market-Garden.

Of Stone, Adrian Groeneweg, OBE, the former director of the Airborne Museum located in Oosterbeek, Holland on the outskirts of Arnhem said, "He has chronicled the historical events as envisioned in his writer's imagination by breathing life into well researched facts… Stone has captured a certain flavor and spirit of those I had the privilege of knowing and still know…The interplay between his fictional characters and the real life participants rings true…I congratulate Stone on his life-long dedication and passion for their story. I recommend Red Devil Rising to anyone interested in the subject.