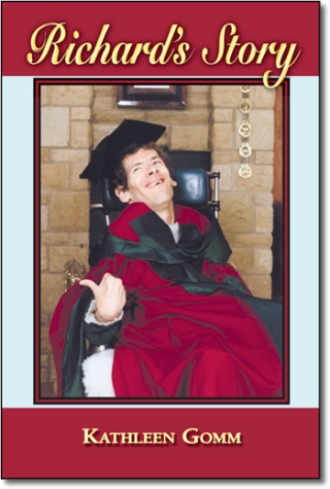 After a difficult birth and deprivation of oxygen, Richard didn't develop normally, and was diagnosed with cerebral palsy, unlikely ever to use his limbs or to speak. His parents were appalled when doctors told them he was not of normal intelligence and that they should put him into a home, forget him and start their family again.

They refused to accept it and this inspiring book by his mother, describes their heroic struggle against all odds to help him to learn to read, write and communicate with the help of a pointer strapped to his head. At first communication was through a letter board, but later a computer. He gained a place at grammar school and a university education at York, where he gained a BA (Hons) and culminating in a PhD from the University of Wales at Swansea. He also wrote two books of poems which expressed his feelings and his care for others and learned to paint.

Despite his enormous difficulties and life in a wheelchair, he was able to accept and give a great deal of love. The family greatly valued Richard and later a sister, Debbie, arrived and then a brother, Michael. Now, it is hoped that this amazing story of love, courage and faith, will bring encouragement to others who may be in a similar position.

Kathleen Gomm was born in North Wales but when she was six, the family moved to Hampstead, London. She received an excellent education and eventually qualified as a pharmacist from London University. She met her husband, Mervyn, when she was seventeen and he, having just finished his national service, was nineteen. They met at Hampstead Town Hall where they both went to dance. It was three years later they were married and Richard was born the following year. Siblings for Richard arrived and they had a daughter, Debbie, and a second son, Michael.

Kathleen wrote notes and kept a scrapbook with her son Richard, because he intended to write his own autobiography once his studies were completed. Sadly, Richard died young and never wrote the story but these notes have helped Kathleen to express Richard's own feelings and thoughts in the book. It is a story of unconditional love, of courage, ingenuity and energy, written in memory of a beloved son.