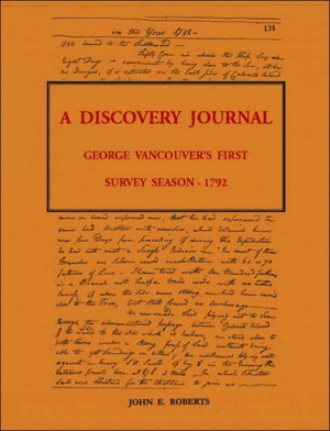 George Vancouver’s first survey season is chronicled, for the first time, on a day-by-day basis. During that period, Vancouver’s expedition encountered the Spanish explorers, Galiano and Valdes, whose activities are interwoven with those of their British counterparts.

The work contains much previously unpublished information about the voyage, augmented by explanatory notes and maps to stimulate the interest of the general readership and to satisfy the requirements of the more academic reader, or teacher.

The following elements are of particular note, representative of the original research that has gone into the preparation of A Discovery Journal:

A possible explanation, not previously considered, is given for Vancouver’s failure to more closely examine the Columbia River.

The precise meaning of the term “All in a Day’s Work” is explained, by example.

Vancouver’s meeting with Galiano and Valdes is re-examined with a new interpretation as to the significance of the encounter.

A possible identification of the tree that Vancouver had in mind for his “Scotch Fir Point” is suggested.

An explanation for the error in charting Loughborough Inlet is offered.

A vindication of Vancouver’s actions in the Camelford Affair is given in the Epilogue.

An Appendix includes the words and music to Spanish, French and English versions of the song, “The Marlborough”, sung by the Spanish sailors to the natives off the mouth of the Fraser River. A detailed examination of the groundings of the Discovery and the Chatham in Queen Charlotte Strait is reviewed in “Hard Aground”, which for the first time gives the precise location of these events. A copy of the final muster for the Discovery completes this section. A Bibliography and a General Index, with an Index of Flora and Fauna complete the work.

John E. (Ted) Roberts was born in Victoria, B.C. in 1922 and spent most of his life in the Lower Mainland and Victoria. He was educated in Vancouver, Toronto and Victoria, and during time spent on surveying Provincial Highway 16 developed an interest in the life and work of Capt. George Vancouver.

His first employment was as a junior clerk in the Engineering Office in HMC Dockyard, Esquimalt, followed by work at Boeing Aircraft in Vancouver as a template maker and then into Sales with Railway and Power Engineering. This move introduced him to the Iron and Steel trade and for 10 years he was the Purchasing Agent for AIM Steel, whose work included the Queensborough and Alexandra Bridges among notable structures. This was followed as CEO of one of Canada’s largest specialty steel importers and ultimate retirement to Victoria in 1978.

In 1969 he designed and prepared the construction drawings of the Discovery display in the Royal B.C. Museum and began serious research into the men and methods associated with Vancouver’s work on the charting of our coasts. He arranged for a special Vancouver Sunday held at Christ Church Cathedral, Victoria on May 18, 1998 to commemorate the 200th anniversary of Vancouver’s interment in St. Peter’s Church Petersham and in 1999 prevailed upon the Provincial Government Heritage Branch, by Order in Council on behalf of Her Majesty, to proclaim May 12th, in perpetuity, as Captain George Vancouver Day.

Failing eyesight took away his hobby of wood carving and his younger daughter was the recipient of his set of some 80 chisels acquired over the years. He is blessed with a wonderful caring family of three children, six grandchildren and six great grandchildren. His beloved wife, Betty, passed away in early 2004.