The Road of Smoke 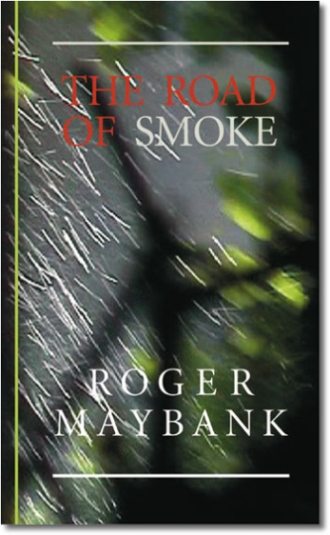 A man, paralyzed in a chair in a room overlooking an unbroken plain, watched by an old man and old woman who are unknown to him, becomes aware of a group of boy-scouts who are shoring up a wall near him, from which blood is oozing. They are also bringing towards him, on wagons, objects of all kinds, many of which he recognizes as once being his own, including a great bed in which his dying grandmother is lying. Slowly the plain near him is overlaid with rocks and stunted trees, through which, in a trench, blood from the swollen wall is flowing. As this landscape is constructed, he makes his way through it, finds himself in a house by the ocean, with icebergs drifting past the windows, and below it the great corridor of a public building, with pictures in high relief on its walls, one of them of his grandmother in bed; which he climbs upon to find himself in a great church in winter, at a celebration he doesn't understand, where an old man is forced through the ice into the ocean below. He feels increasingly threatened by all the country people round him, without understanding what it is they want of him. The priests try to protect him, but the men pursue him over the rocks and into the ocean, where he appears to die. He wakes in a grassy landscape by a lake, mounts a horse waiting for him, and rides for miles and days, guided only by the calling of a woman's voice, which, he is told, is that of the queen. The landscape is more stable, but 'legendary', with old women helping and not helping, and old wise men half-visible by the shore of the sea. And the calling of the queen is ever there and not there.

Born in Winnipeg and lived there for twenty years. Not often since. After university in Britain and some European wandering, he lived in Greece for some years, on an island, writing. Returned to Canada, to live on the west coast, where he began to write plays. THE ROAD OF SMOKE is his third novel.