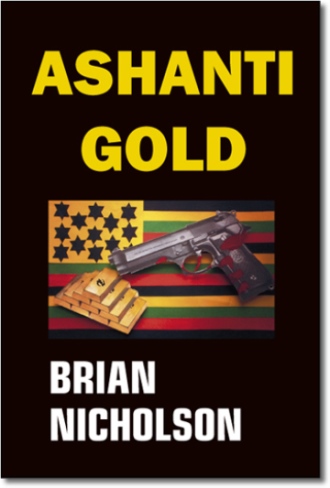 An investigation into the disappearance of an ineffective agent, from the now-defunct Secret Intelligence Service at the British High Commission in Accra, reveals a conspiracy to overthrow the governments of the countries in West Africa by subversion, terrorism and tribal civil war.

The cruelty and corruption of the 18th century Portugese, Dutch and British slave-traders who raped West Africa of its human and mineral resources, is easily surpassed by that of 21st Century, power-hungry, West African exiles, ruthless arms dealers, diplomats and politicians on both sides of the Atlantic who are involved in the conspiracy.

Governments can be brought down by subversion, terrorism and civil war. Terrorists need weapons which must be bought with money…lots of it. Gold is money…and in Ghana is the richest gold mine in the world at Sawaba in the Ashanti Region where nuggets as big as walnuts can be illegally panned from the Ofin River and then sold to dealers abroad…just as was done during the 18th Century slave trade.

This is John Gunn's third assignment with the British Intelligence Directorate, which he undertakes while still recovering from a gunshot wound from his previous assignment.

His first book, 'GWEILO' focuses on the return of Hong Kong to China. His second book, 'AL SAMAK' is about Saddam Hussein's efforts to acquire WMDs to prevent the invasion of Iraq by the coalition forces in 2003. The third book 'ASHANTI GOLD' uses his exciting exploits in West Africa as a colourful background to a novel that focuses on the famine, chaos and corruption in the African Continent. The author's latest novel 'FIRE DRAGON' uses material from his experience as a Defence Attaché in Jakarta, where he travelled extensively from the remote areas of Sumatra, Kalimantan and Irian Jaya to the troubled Island of East Timor. This provided an ideal backdrop for a North Korean/Indonesian conspiracy to develop a nuclear weapon and the means of delivering it.