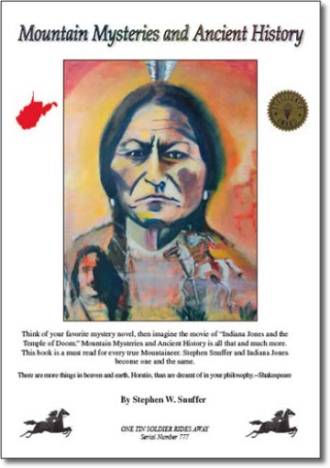 Indiana Jones meets West Virginia? Author Stephen Snuffer takes you on a fascinating trip through West Virginia history, discovering the artifacts, stories, and photographs that weave a rich tapestry of our past. From Indian mounds to the famous Hatfield - McCoy feud, West Virginia is rich in regional history. And of course, what does the past tell us about the future? Did the people who lived hundreds of years ago send clues to future events?

Travel with the author on a history time machine to unravel the mysteries and ancient history of the founders of West Virginia. Listern to the voices of the long departed people as they tell their stories and share the secrets of the Indian mounds. Fasten your seat belt, as you will be travelling at warp speed to unlock the mysteries of the first Mountaineers.

Stephen W. Snuffer has been employed by the State of West Virginia as a Substance Abuse Therapist with the Division of Corrections where he worked with maximum security inmates one-on-one. He has a B.S. degree in Criminal Justice Administration from Bluefield State College. He did his master's degree work in correctional counseling at Marshall University.

Snuffer has run for public office for State Senate and has been owner of Snuffer Insurance and Hometown Insurance Agency for over twenty years. He has owned Security First, a private investigation firm.

He is a member of The Church of Jesus Christ, where has been the Sunday School president and also served as mission leader in the past. Over the last thirty years, he has written many newspaper stories that have been carried by several local papers.

Mr. Snuffer lives with his wife, Linda, in a round house located in a pine forest in southern West Virginia. When asked why he built a round house, Snuffer replied, "I do not live in a square world, so why live in a square house?" He has three children, Brian, Richard, and Stephanie. He wrote the story, "West Virginia, Land of Mysteries" about the ancient people who once lived in West Virginia. They build huge dams, write about their faith in Christ on sandstone cliffs, and once built a wall over seven miles long.