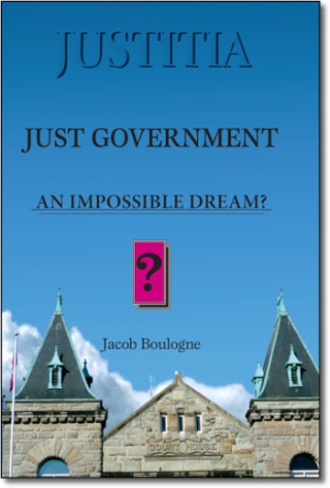 Mr. Boulogne largest book, the sixth in a series of books dealing with education theory, including moral education theory. Just Government, An Impossible Dream, is actually two books rolled into one larger book. The latter part of this book was previously published under the title, The Moral Code A Catechism and deals with basic moral relations between persons acting individually with each other. But since so much of human conduct occurs in a social/collective setting, such as the beastly Nazi conduct during World War II, individual conduct is much more difficult to asses. How would you have acted in the circumstances the German people found themselves in? From the perspective of morality, there is only one kind of human being on earth, and history tells us that the bulk of German people were pretty ordinary folk, with both vices and remarkable virtues.

Obviously the actions of the German State have to be considered separately from the individual moral character of the citizens, and this applies to all nations, most of which have skeletons in their closets. Democratic government is now thought to be the best of all systems, but the very concept of majority rule is NOT morally sound; a predominantly Catholic country might just decide that Protestantism was to be banned. Clearly, it is that all-important national constitution which tames the excesses of democracy, and makes democracy a moral and practical success, at least in theory. The author contends that the evil(s) of politics arises from faulty constitutions

For nearly forty years, Jack, a physics teacher as well as an ethics teacher, has devoted much thought, reading and practical experimentation to the understanding of fundamental moral theory as well as the methods of practical moral education of the secular kind. Morality is marked by many deep puzzles and two particular moral conundrums have particularly interested him, one being the objectivity of moral judgments, and the nature of moral reasoning. A related conundrum is the nature of good government, and whether this is the same as just government.

Part of Jack's own moral education consisted of three and a half years spent in a Japanese concentration camp, where moral justification and just government are thrown into stark relief. In the last ten or fifteen years the answers to all these controversies and paradoxes became clear to him, and he started writing books, partly to clarify his own thinking and partly to offer the solutions to all these manifold philosophical puzzles relating to how all humans make moral judgments and guide their behavior by their moral conceptions.

Being a practical high school teacher as well as a dyed in the wool intellectual he is also a physically active person, a gardener/botanist, and a designer and builder of two distinctive homes; one of these houses he and his lovable wife inhabit in a stunning setting in Nanaimo, British Columbia. He has had much pain in his life but considers himself to be a happy man in having made a positive difference.