My WWII Childhood - From Survival to Opportunity 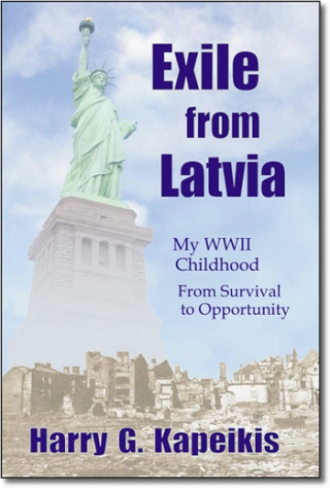 Exile from Latvia is the story of a young boy's experiences before, during and after World War II, told endearingly, to touch the heart.

Driven from his beloved Latvia by the Soviet Army, Harijs' family flees to Germany in the hope of being captured by the advancing American forces. The family experiences hardships of all kinds - hunger, homelessness and air raids. They brush with death many times in many ways and their life is often punctuated with misunderstandings, both humorous and tragic. Presumed guilty they must prove their innocence. The continuous migration causes Harijs to lose friends constantly. These experiences shape Harijs' life, surprisingly, in a positive way, especially in the Displaced Persons' camp under dedicated teachers and scoutmasters. There are lighter moments as young Harijs discovers girls, often handling the developing attraction in awkward though humorous ways, eventually touching the heartstrings of a girl tenderly. There is laughter, love, grief, tears and longings of the heart. Finally the anticipation of an unexpected future replaces the memories of cruelty, atrocity, hate, betrayal, misunderstandings, ignorance and fear with commitment to meet the future with confidence. During the war years Harijs made friends only to lose them. He will not lose you. You'll move alongside him through the first-person escapades of a pre-teen boy looking for answers in a senseless world.

Toward the end of World War II, Harry's family fled the Soviet army in a southwest direction toward the advancing US and British forces in Germany. In June of 1945, the family came under the protection of the US forces and eventually found temporary refuge in a Displaced Persons' camp in Haunstetten, near Augsburg, Germany. As the camps were to be closed by July 1950, the Kapeikis' family took the opportunity to emigrate to the United States in March of 1949, settling in Tacoma, Washington, where Harry finished his secondary education. Harry earned a Bachelor of Architecture Degree from the University of Washington in 1960 and a Master of Divinity degree from Pacific Lutheran Theological Seminary in 1968.

In 1957, Harry married JoAnn Doubek. In 1968 the couple moved to Canada. Harry and JoAnn now live in Penticton, British Columbia and are the proud parents of a married son, Paul (Louise), with two daughters and a son; and a married daughter, Cheryl (Eric) Hofman with three daughters.