We Kneeled at the Master's Feet 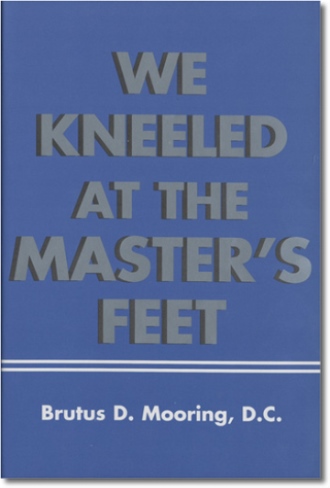 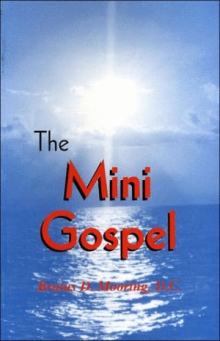 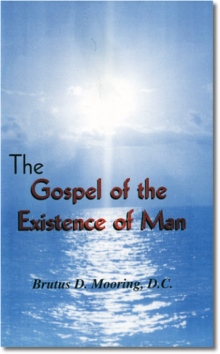 We Kneeled at the Master's Feet is a presentation of a lifetime of spiritual experiences as lived by a person who, at the time of Christ's sojourn, was one of the twelve. He was not Judas. Christ has sent him back into the earth setting to help prepare for Christ's return, which is imminent. He had two missions to perform and the second is to help prepare for the return of Christ into the earth setting for His "second coming".

The chiropractic profession is a system of health care that was given by God to mankind in order that we could be healthier and be more free of drugs and the toxicity that results from them. Dr. Mooring is 85 years of age at this time. It was only approximately 15 years ago that he was made aware of who he is and who he was at the time of Jesus Christ's ministry. He was informed that it was to remain confidential until the appropriate time. He has written three books; the above mentioned book, and The Gospel of the Existence of Man and The Mini Gospel, which is a condensed version of the "Gospel". These books were written and he was told to place them in a safe keeping until the appropriate time. He placed them in a bank safe deposit box until the fall of 2000, at which time he was told to take them out and publish them. Because Jesus Christ's return is due to be soon, this is the appropriate time to begin informing all mankind of His soon return. It is Christ's desire that mankind should have an explanation, in simple, every day language, who they are, where they came from, what their purpose here on earth is and where they are going. The Gospel of the Existence of Man and The Mini Gospel are NOT to replace the bible, but are an addendum to the Bible. In His words, the Bible is the most hallowed book in existence. It has led untold millions of people toward God, and that is as it should be. Because it has been so changed, misinterpreted, rewritten, added to and much of it deleted, these explanatory books are now given to mankind that they may understand and be better prepared for His return.

Dr. Mooring was given, in this lifetime, three wives. Each of whom were touched by God who opened their minds in such a way that they were able to go into deep trance, project their conscious minds into the higher spiritual planes. By so doing, Dr. Mooring was able to communicate with those on the higher planes of existence. In this way, he was able to receive messages, directions and instructions from those of high authority from "above". He has been guided by those who, at times of Jesus' ministry, were His apostles and others who worked closely with Jesus. James, Phillip, Lazarus, Martha, Matthew, Peter, Zebedee and others of note. Dr. Mooring struggled through this lifetime doing the things that were before him to do, not knowing that he was on a "mission".

Each of his wives, after completing their mission on earth were taken, leaving him to his own devices to wait for further instructions. After the books were finished he has been "waiting" and has been able to receive only a limited amount of information from "above".

Much later in life he was made aware of the fact that he came into this life with two missions. The first was to help develop the Chiropractic profession and the second was to set the stage for the return of Jesus Christ for His "second coming". These books were written in the years 1986 and 1988. The two small books were channeled from the spirit world through his wife Elizabeth. The larger book, We Kneeled at the Feet of the Master, was channeled through him in the year 1988. It contains information and experiences of a life-time with his three beautiful wives; Tena, Pauline, and Elizabeth. Without them this work would not have been possible.

Dr. Brutus D. Mooring, is an 80-year-old chiropractic physician who has been functioning under the direction of God form any years. He has lived a highly spiritual life and the book, We Kneeled at the Master's Feet , is a presentation of a lifetime of spiritual experiences. He has had three wives, each of whom were touched by God, opened to the spiritual planes. They, each were able to go into a deep trance, project their conscious minds in the spirit world. They would retain control of their vocal apparatus and hearing mechanism. By doing so Dr. Mooring could communicate with highly-evolved beings in the higher planes of existence.

He has been under the guidance if those who, at the time of Jesus Christ's earth walk, were the apostles and others worked closely with Him. He was able to talk with those, and many others on the higher places of existence. At the time of Christ's earthly mission Dr. Mooring worked closely with Him. He was not Judas. He was sent back to earth at this time in order that he can assist in the return of Christ for his "second coming".

Dr. Mooring was given two missions in this lifetime. The first was to assist in the development if the chiropractic profession and the second was to prepare for ChristÕs return. These three books are designed to help further this second mission, and to strengthen the first mission.

These books are presentation of some of the living experiences God has given him during his lifetime that all peopled who will read them can realize that God is real and He can and does work miracles in the lives of people here on earth.