The Journal of Anne Reading

From Florence Nightingale to Dorothea Dix and Beyond 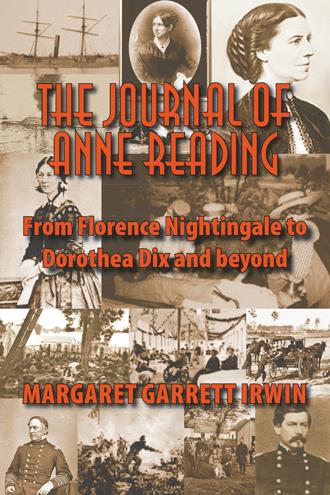 Anne Reading, an ordinary woman from London describes her extraordinary life. In 1855 she travels to the Crimea with Florence Nightingale and nurses the sick and wounded of the British Army. Five years later, she takes a six week voyage to New York aboard a sailing ship.

Anne finds work at St. LukeÕs hospital. The following year brings the start of the Civil War. In 1862 Anne leaves St. LukeÕs and travels south to the headquarters of the Union Army in Washington. She was hired by Dorothea Dix, Superintendent of female nurses to the Federal Army and also known as the American Florence Nightingale.

AnneÕs saga becomes the story of her life among the wounded. She describes experiences on hospital ships and in a former hotel converted into a hospital in Alexandria, Virginia. The diary chronicles the impact of atrocities on the soldiers. The general social unrest which developed in the northern cities as the war continues and the riots against the drafting of young men into the army against their will, makes very interesting reading.

Anne married Andrew Furry in October, 1862 and soon gave up nursing and returned to the New York area. She does different work while waiting for him to be released from the army. She provides a detailed account of the death of President Lincoln and an eye witness account of his lying in state and funeral procession through New York in 1865.

The diary continues with the FurrysÕ married life in Pennsylvania and New Jersey highlighted with the marriage of AnneÕs younger sister, Jenny and a swimming party at Coney Island. In 1870, Anne FurryÕs mother, Anne Reading writes about her trip to visit her daughter, with another daughter and the diary closes with the two of them returning to Bethnal Green, London, one year later.

Margaret Garrett Irwin has been writing for about thirty years. She has several published stories and articles. She was born in Muswell Hill, London and grew up in the northwest leafy London suburb of Mill Hill. She lived in England through World War II and the austere years afterwards. She was educated in England and obtained an Associate of Arts degree in Fresno, California. Margaret has two dipolomas from Long Ridge Writers Group in Connecticut. Margaret was a secretary for seven years before moving to California in 1962. She married a cattle rancher and has written about how she went from being a London secretary to becoming a California cowgirl. Margaret has a son and daughter, two grandsons and two granddaughters. Margaret divorced in 1983, married again in 1994 and became a widow in 2011. She moved back to the Fresno area and lives near the San Joaquin river. She became a volunteer at Fresno Veterans Administration and joined a writing class in Clovis which led to her being invited to join a women's singing group. Margaret has been involved in many different kinds of jobs besides secretarial - Avon sales, telemarketing, weight loss counselor, care giver and water aerobics instructor. She is currently employed at a local gym teaching aqua aerobics. She continues to volunteer at the VA where she met her present husband. They were married on August 3, 2013. Besides singing, Margaret plays the piano, swims, walks and is an avid reader. She is currently working on starting again to market this book and has several new writing projects in hand.