It Beats Working For A Living 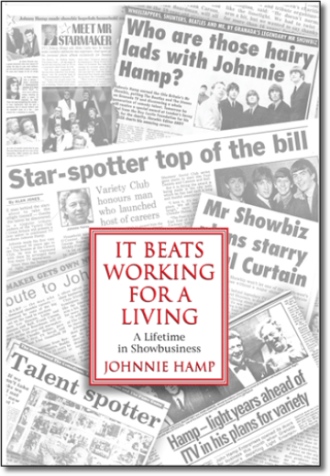 As well as being a personal memoir Johnnie Hamp's autobiography contains a collection of fascinating showbusiness anecdotes and some embarrassing moments involving many of the stars he has worked with - the all time greats of variety, the rockers, the song writers, the movie stars, the pop idols, the 'discoveries', the comedians.

Johnnie explains how it feels to be chosen as the subject for This Is Your Life, why he still cringes when he remembers what he said to John Lennon, why Frank Sinatra got the hump, why he gagged Bernard Manning, how he conned Woody Allen, hustled Peter Sellers and shot Larry Hagman.

During a unique showbusiness career which spanned six decades Johnnie worked with most of the major British and American stars of his era, from the first time he appeared on stage as a boy stooge to his magician father, until he eventually rose to become Head of Light Entertainment at Granada TV.

He is probably best known as one of Britain's top television producers who created award winning hit series such as: The Comedians, The Wheeltappers andShunters Social Club,The International Pop Proms, and 'specials' with artistes like The Beatles, Woody Allen, Ella Fitzgerald, Burt Bacharach, Count Basie, Jerry Lee Lewis, Little Richard and many more.

During a unique showbusiness career which spanned six decades Johnnie worked with just about every major British and American artiste of his era. He made his debut in showbusiness as a boy stooge to his magician father, eventually became Head of Light Entertainment at Granada Television and was later the subject for This Is Your Life.

Johnnie devised and produced more than two thousand programmes for television and was responsible for the first major TV appearances of countless artistes - from The Beatles in the sixties to Lisa Stansfield twenty years later - and he introduced viewers worldwide to countless funnymen like Bernard Manning, Frank Carson, Mike Reid, who were to become stars overnight when he devised the award winning series The Comedians.

As far as showbusiness trends are concerned Johnnie has always seemed to have been in the right place at the right time. As a lad he was touring with all the great music hall names, then as a teenager he won several talent contests and toured with his own act. During the fifties, after a spell in the RAF, he was presenting one night stands with the likes of Frank Sinatra, Johnnie Ray and Frankie Laine - and later with Cliff Richard, Tommy Steele and Buddy Holly.