The Ultimate Experience: The Many Paths to God

Your Space Brothers and Sisters Greet You! Book 6 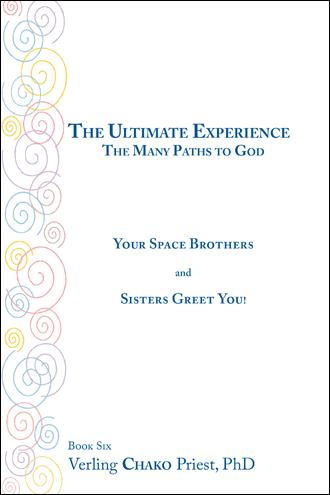 This incredible book gives you a peek into the world of spaceships as told by eleven Masters of the Ashtar Command. Each Presenter gives his or her description of what awaits us if we choose to be lifted up on board these beautiful UFOs of Light.

Lord Yeshua/Jesus orchestrates this sixth book, as he introduces each Presenter: Andromeda Rex, Ashtar, Lady Tuella, Quan Yin, Lord Surea of Sirius, Christ Michael, Archangel Michael, Lady Nada, Divine Mother, Djwhal Khul, and Lord Sananda. There are twenty chapters that keep the Reader wanting more. We are told that the lift-offs onto these exquisite ships are by our free choice only. There will be four waves of opportunity for humanity to escape the rigors of Earth changes. Christians will equate this to the Rapture that is described in their bibles. We are told that this gift of lift-offs is through God's Dispensation that is offered to everyone, regardless of his or her religious affiliations. All that is required is love in one's heart toward humanity. You will be accepted.

Book SIX will stretch your beliefs and bring you into the world of science fiction, except truth is spoken here. Be ready to be lifted into a new realityÑa reality of spaceships, the Masters' home away from Home.

Verling CHAKO Priest, PhD was born in Juneau, Alaska, hence her name of Cheechako, shortened to just Chako by her mother, a medical doctor, and her father, an Orthodontist. Chako was raised in Napa, CA. She attended the University of California at Berkeley where she met her future husband. Upon their marriage and after his training as a Navy pilot, they settled into the military way of life. They lived twelve years outside of the United States Mainland in various places, which included Hawaii, Viet Nam, Australia, and Greece. Little did she know that these exotic lands and peoples were preparing her for her spiritual awakening years hence?

After her husband's retirement from the Navy, they resettled in Napa, California. It was during this time that she returned to school at Berkeley, transferred to Sonoma University where she earned her first two degrees in Psychology. Chako then entered the doctoral program at the Institute of Transpersonal Psychology (ITP) at Menlo Park, CA, which is now located in Palo Alto, CA. She successfully completed that program which consisted of a Master, as well as the Doctorate in Transpersonal Psychology. Ten years and four degrees later she was able to pursue her passion for Metaphysical and New Age Thought-her introduction into the realm of the Spiritual Hierarchy and the Ascended Lords and Masters.

In 1988, Dr. Priest moved to Minnetonka, Minnesota. She co-authored a program called, Second Time Around for those with recurring cancer for Methodist Hospital. She, as a volunteer, also facilitated a grief group for Pathways of Minneapolis, and had a private practice.

She studied with a spiritual group in Minnetonka led by Donna Taylor and the Teacher, a group of highly developed entities channeled by Donna. The group traveled extensively all over the world working with the energy grids of the planet and regaining parts of their energies that were still in sacred areas waiting to be reclaimed by them, the owners. They climbed in and out of the pyramids in Egypt, tromped through the Amazon forest in Venezuela, rode camels at Sinai, and climbed the Mountain. Hiked the paths at Qumran, trod the ancient roadways in Petra, Jordan, and walked where the Master Yeshua walked in Israel.

The time came, November 1999, when Chako was guided to move to Arizona-her next phase of growth. This is where she found her beloved Masters, who in reality had always been with her. They were all ready for her next phase, bringing into the physical several books-mind-provoking books, telepathically received by her, from these highly evolved, beautiful, loving Beings. Each book stretches her capabilities, as well as her belief systems. Nevertheless, it is a challenge she gladly embraces.

It is now November 2007. She just has finished writing the sixth book. The Masters are now speaking of the seventh and eighth books. There seems to be no end in sight (smile).