Nantan - The Life and Times of John P. Clum 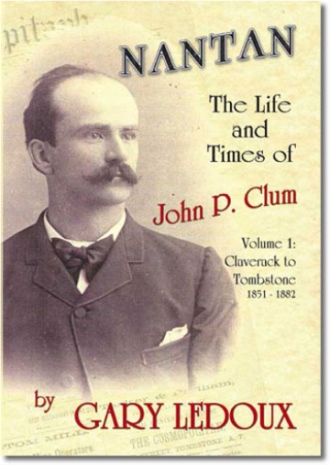 John P. Clum is perhaps best known as Tombstone's Mayor during that town's most violent period. But that was just one small slice of a long and fascinating life! Blazing a trail across the American frontier, John Clum engaged in a multitude of exciting careers.

As a "Storm Sergeant" he telegraphed the first weather report from a post-Civil War Santa Fe, New Mexico.

As an Indian Agent and one of the earliest advocates for Indian rights, he founded the first successful Indian self-ruling government complete with an Indian Police force, a concept later adopted by the US government for all reservations. He would use his Indian Police to help capture the renegade Apache, Geronimo - the only time Geronimo was ever taken at gun-point!

He founded, what is today, the second oldest continuously operated newspaper in Arizona, the Tombstone Epitaph, an enduring icon of the old west.

He became an enemy of Tombstone's cow-boys including Curly Bill Brocious, Johnny Ringo and Ike Clanton when, as Tombstone's Mayor, he supported the Earp/Holliday "faction", surviving an assassination attempt.

He could handle a gun and a town council meeting with equal aplomb. And it is all included here in Nantan: The Life and Times of John P. Clum - both sides of an extraordinary man.

A native of New Hampshire, Gary Ledoux has had a long-time love of the old-west; his interest focused on Tombstone and its characters, legend and lore.

His first book, Tombstone: A Chronicle In Perspective debuted in October, 2002.

He was a contributor for the October, 2006 OK Corral 125th Anniversary Event in Tombstone giving a speech on Tombstone's Allen Street, in character, as Mayor John Clum.

Gary and his wife, Rachel, presently live in southern California.