The Camel We Christians Have Swallowed 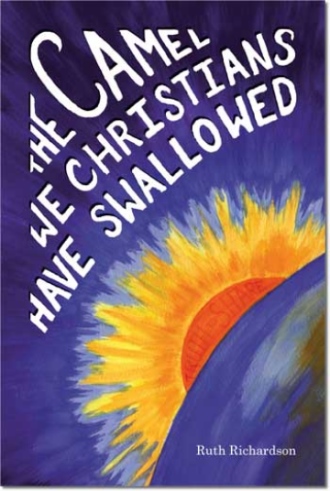 Underway is the dawning of a new day, as the bright morning sun - representing "the sun of prophecy (Micah 3: 6)," lights the night - the darkness by which prophecy is often explained. With the light of Jesus shining brightly on the explanation of prophecy - "For the testimony of Jesus is the spirit of prophecy (Revelation 19:10)," we understand it and the rest of the Bible clearly. "Truth to Share," this book's logo, is almost unseen. The title, arched overhead, represents a rainbow full of promise.

The cover art is by the writer, inspired by a friend's visualization.

The title itself is a word-for-word "given," as is the final section, "The Rainbow," in chapter seven. "The Camel We Christians Have Swallowed," as stated in the introduction, is not the well-known "eye of the needle" camel. It is from Matthew (23:23-24) where Jesus accused the Pharisees of straining out a gnat and swallowing a camel, neglecting the weightier matters of the law, justice, mercy and faith. (More explanation of this title is in the introduction and chapter one.)

In Pasco, Washington State, USA, 1945, on the day known as V-E Day (Victory in Europe), Ruth Richardson was born into a devout Christian family.

In the fall of 1982, Ruth began reading the Bible. Turning to a diligent study, the search for truth became an obsession. Learning to trust God alone for answers, Ruth's only teacher became the Bible. Years passed. Rather than decreasing, the number of questions grew.

Frustrated, pounding her fists on the desk, she screamed, "God, what's with your book? Your creation coordinates; there is a wondrous plan! There is harmony. But the Bible...? Furthermore, what's all this talk of Good News? - It seems you should have called it good/bad news." Expecting lightning to strike her down, Ruth braced for death. No Lightning! However, later she did suspect that God laughed. Determined to understand how it fit together, Ruth invested more years reading and studying the Bible.

Finally giving up, she came to a place of comfort - that someday, she, along with millions of other persons with questions, would sit at Jesus' feet, waiting no longer for His answers; they would make sense and coordinate.

Several weeks later, in the spring of 1992, the answers came to many of Ruth's questions. Now it made sense! Though profound, the information was, however, surprisingly unconventional.

Studying the Bible for her benefit alone, she resented the thought that kept entering her mind, "Write what you know. You must share it with others." Refusing adamantly for many reasons, topping the list was - no one would believe her. "Absolutely not!" She would not attempt this daunting task - Ruth pleaded that this "assignment" be given to someone, anyone else! The request to compile the information persisted until, in January, 1993, Ruth finally relented and said, "I will try."

Following a discussion of the responsibility and complexity of the task, a concerned friend, after leaving Ruth's home, said a prayer. Shortly after the friend's car left the driveway, another answer flashed into Ruth's mind - the solution to the mystery of the keys of God's kingdom, presented in chapter three.

The Camel We Christians Have Swallowed, representing twelve years of work, is available at your fingertips. If you have unanswered questions, whether you read the Bible or not, perhaps you will find and consider the unexpected.

Bible scriptures flooded my waking mind. Scriptures previously presenting questions now linked together like pieces of a puzzle offering mind-boggling answers; the truth - no contradictions or inconsistencies. Rather than bad news for some people, the truth stood its ground as good news for everyone. Jesus said the truth sets us free. It does! The unexpected answers struck a profound chord.

Expanding the borders within which Christians are taught to believe, this good news required exposing. Despite my early refusal to do this work, I realized that Christians worldwide question, seeing that truth can have no inconsistencies or contradictions. Must God's truth rest confined within such a framework?

Inadequately expressing the wholeness of receiving a message from the Holy Spirit, the information on these printed pages is offered for your consideration; Jesus promised to send the Holy Spirit to teach and counsel those who ask. My goal is that the reader, understanding the guidelines by which the truth is recognized, will himself learn to listen to God's Spirit.

Steeped in years of Bible study and contemplation, I learned to ask myself difficult questions and became willing to let Jesus reprimand not the Pharisees, Saducees, scribes, His disciples or others, but reprimand me.

The same learning technique carries this work throughout; the title is no exception. The Camel We Christians Have Swallowed is not the well-known "eye of the needle" camel. It is from Matthew (23:23-24) where Jesus accused the Pharisees of straining out a gnat and swallowing a camel, neglecting the weightier matters of the law, justice, mercy and faith. Learning to apply this and all warnings in the Bible to myself, I ask you to do this in a matter of pages and soon you will gain much ground on the path we all travel.

The use of the male gender is prevalent in this material because it is a non-issue. Out of respect for those who do see it as an issue, I'll explain: God created both male and female in His image (Genesis 1:27), and named them Man (Genesis 5:1-2). Jesus said, "God is Spirit (John 4:24)." Created in the image of God, having no form, means not created in the form of man, but in the Spirit of God. All mankind "fell" from the state in which he was created - the spiritual state.