The Depth of Heights 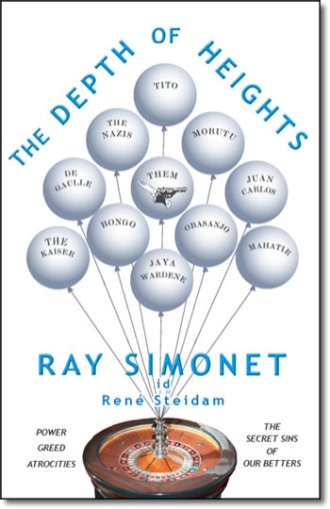 The Depth of Heights is the reportage of a diarist seen with the eyes of a Franglais.

I have taken great care to present all happenings responsibly and with as near accuracy as possible, since I was rarely sitting by the ears of any of the Grandees I came across, or within ear-shot, but flirting a lot with political danger in the company of their minions, and sometimes in real danger to myself,.

All the real names have been changed, except, of course, the unchangeable names of the grandees.

That I was driven by hatred is true, but having assessed, after the events, the horrors afflicted to my mind by that same hatred, I have sworn to myself never to put my children to the same torments, hence never to divulge to them some of the terrible things I have been made to either witness or suffer.

I hope they will forgive me, but I wanted them to remain sane.

My good and devoted friend, Tom, always said that I was just like a rubber ball, bouncing back and higher every time I was thrown to the ground, simply it was (is) in my nature.

Tom was always a good judge of character.

But what I went through in 1940, in the fall of France, is accurate. And was so disheartening, but why cry?

Even a pool of mud can reflect a ray of sun.

Nurse Collins was there, my big sister, bless her, and so was Christianne, my adopted sister, and so were Sylvia, Allison and Lynne, my three wives, and many others I cannot name. Bless them all.

And what I went through since is the truth, the whole truth and nothing but.

Omissions have been made in the name of decency, tolerance and respect for the departed, if not for the culprits.

But this is what non-fictions are made of:
Admissions and Omissions,
Truths and Half-truths,
Fabrications and Refractions,
Probity and Corruption.

As Victor Hugo wrote: "Celui qui pourrait tout comprendre voudrait tout pardonner". "Only 'He' who could fathom it all could forgive everything." Only God has what it takes for that.

Volunteered for the Ambulance Corps of the French Red Cross the 5th September 1939, while too young by law for any Armed Service. Member of the French Resistance (Group Lorraine) from September 1941 to May 1943, when arrested by the Militia and deported to Germany as "Partisan" until May 1945.

Born son of an Hotelier, Hotel Cecil, La Baule, built 1923 and registered 4 star "A", 70 rooms only but all with private bath and best amenities at the time. Was trained and educated in the industry by his Father.

The hotel was hit by an incendiary bomb in 1942 during the raid on the St. Nazaire dry dock and burned to the ground.

The land and walls were sold in 1946 by Steidam Senior to a Mr. Giffard, who rebuilt and reopened the hotel in 1948.

Further experience was gained under the wing of his Godfather Georges Rabu, Restaurant "Le Cabaret", Paris 8*, rated one of the First Ten Restaurants of France.

Was trained for Management in High Class Leisure by François André, (Deauville, La Baule, Cannes) Hotels and Casinos Complex, from 1948 to 1956, then came to England after his marriage, as Catering Manager, Wesbury Hotel, Bond Street, London, until 1961, when establishing as Hotel & Leisure Consultant.

Opened seventeen new ventures for various Clients from 1961 to 1972 in the U.K. then:

Acted as Consultant to the Spanish Ministry of the Interior and new Gaming Board to prepare and supervise all Applications to open Casinos in Spain in 1977 & 1978.

On the invitation of Government Ministers sent by President Junius Jayawardene, made his first visit to Sri Lanka in January 1979. In 1980, bought one estate on the sea-front outside Colombo for developing a Holiday Complex, and one estate in the Central Mountains (Tea Country) after discovering a source of mineral water.

The target being a Bottling Plant and a Spa Resort.

Started working on the two Projects in 1980 until 1985 when civil unrest put an abrupt stop to any development.

Has worked on the actual Project since, from his office in Hove.