Two O'Clock at the Gate 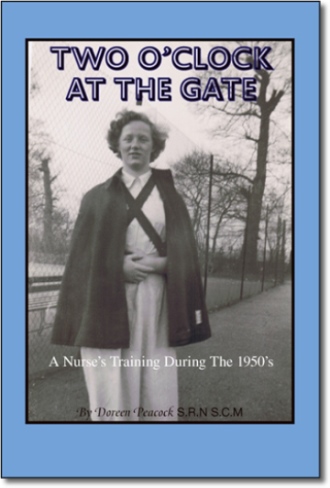 The book follows a nurse's training in the 1950's. It was written in rough in the 1960's from notes made during training. It evokes the period with remarkable freshness.

The author was born in 1935 in Bristol. She spent some time in care during her early childhood prior to being adopted by a couple from Horsham, Sussex in 1939. The money was in short supply in the family, her adopted father being a gardener and later a green keeper both lowly paid jobs

From an early age, she wanted to be a nurse and joined the St John's ambulance brigade as a cadet and learned the basics of first aid which was very useful to her during formal nursing training at St Helier Hospital, London.

After becoming a State Registered nurse, she moved to Edinburgh to obtain her midwifery qualification, and practiced for a while in some of the tougher districts of Glasgow.

Later she moved south and eventually took a post as senior night Sister at the North Middlesex Hospital, this only lasted a short period of time as she had met her future husband Neil who whisked her up to Newcastle in the north east, where she happily became an adopted "Geordie", all the while fighting against increasing disability which eventually confined her to bed for the last years of her life.

She passed away peacefully in August 2005 is sadly missed by husband Neil, and her children Mike and Jonathan.