In The Realm of Madness: Book 1 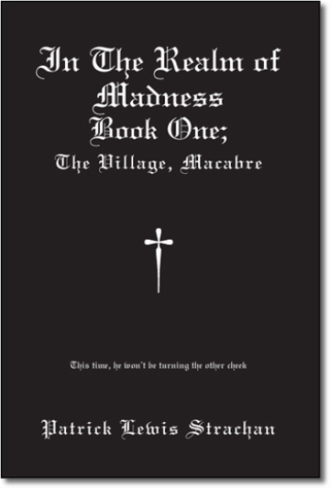 The Lord and his dreaded disciples have come to the village of Macabre, a strange and sinister place where Hell is running amok and a despicable priest, Father Cain, is the cause of all the mayhem there, a vile and devilish cleric who is in league with the dark forces, and who is a wolf in sheep's clothing.

In Macabre, the Lord will battle some of history's most notorious villains, from Nero to Hitler. And he will face his foes anywhere he finds them, be it on the wings of Flight 911, to the dark, chilling waters of Lake Deorc and the sinister, shadowy wooded hills that surround the lake and village.

In Macabre, the Lord will even come face to face with the greatest of his enemies: his dark half! And the Dark Christ could well be the death of him. He's back, he's bad, and he's taking no more shit. He won't be crossed a second time.

Patrick Lewis Strachan was born in 1973 in County Down in Northern Ireland. He is both a writer and poet. The Village Macabre is his first book, and it is the first book in the Realm of Madness series, of which there are six.

The second in the series is The Knights of Golgotha, and the third is Beyond The Heart of Darkness.

Book two will be available in winter 2008. His poetry is collected in the forthcoming, Children of the Briar and The House of Dark & Sin. He presently lives by the Down coast, in the kingdom of Mourne, with his partner and their five children.