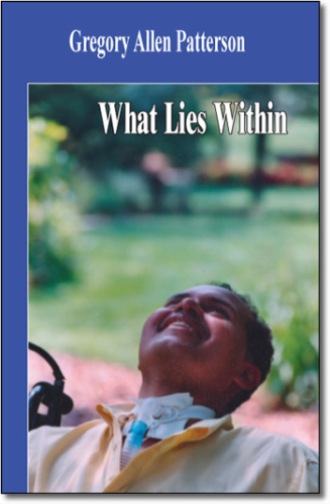 “What Lies Within” chronicles the adult life of Gregory “Allen” Patterson. From promising student to hopeless victim, “What Lies Within” tells of the re-emergence of hope after all is seemingly lost. Patterson shares his life changing, physical, emotional, and spiritual journey from tragedy to triumph.

Allen Patterson’s tale begins in 1995 as a 19-year-old sophomore Engineering student attending North Carolina State University in Raleigh, North Carolina. Patterson along with two classmates visit Washington D.C. on the weekend of October 13 in order to attend the Million Man March. After a night of taking in the sights and sounds of the D.C. area, Patterson and his party become the victims of an unprovoked shooting.

Patterson, miraculously, surviving the ordeal is now faced with the reality that he may be paralyzed for the remainder of his life. “What Lies Within” gives the emotional account of Allen’s fight to maintain his sanity, courage, and some sense of hope after having life, as he knew it, changed suddenly.

Follow along as a young man struggles to climb up from the brink of despair, asking “why me?” to discover the true peace that lies within, responding, “Why not me?” Allen Patterson learns that purpose can be found in the mist of that which seems tragic, as seen in his words, “ So, there is much more riding on us, than our own lives. The welfare of many others is on the line; we simply cannot surrender hope”.

The shooting occurred on October 13, 1995 just days prior to the Million Man March held in Washington D.C. Allen and two of his classmates made the journey, eager, to attend the March so that they could support the combined efforts of men to prevent violence and support positive efforts in the African American community.

However, Allen never made it to the March, for the very reason that he was purposed to attend, Violence. While the three friends were driving in the Washington D.C. area, they became the victims of an unprovoked drive-by shooting. The bullet, that entered Allen's neck, partially severed his spinal cord at the C2 level and nearly ended his life.

Beyond all medical logic and expectations, Allen miraculously survived the shooting. His recovery was provided at the University of Maryland's shock-trauma unit in Baltimore, Maryland. He was then transferred to the Kessler Rehabilitation Center in West Orange, New Jersey before returning home to begin his long, arduous road to recovery.

Allen Patterson’s response to this change was to throw himself headlong into his life with a newfound fervor, being motivated to look inward to self-awareness and self-love. This tragedy changed the course of Allen’s life as he became accustomed to the overwhelmingly different and compulsory way of life.