The Bible and the Beauty of Sin 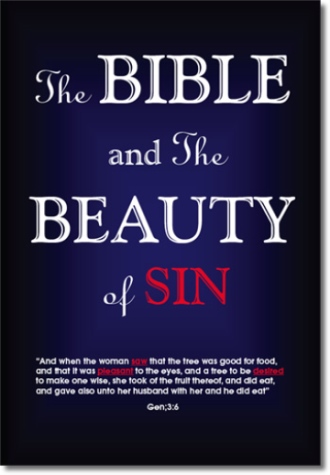 This satire considers the incredibly repeated outstanding success of almost every spiritually deviant act otherwise called sin, as a consequence of its highly beautiful and appealing nature. Beauty by the way, as defined by the oxford dictionary, is the combination of qualities that give pleasure to the senses (especially to the eyes, the ear) or the mind. These qualities could therefore be physical in which case they appeal to the sense of sight - the eyes. It could also be abstract in which case they appeal to the mind, by arousing the aesthetic power of man as they challenge his intellectual character.

The physical attractiveness of the fruit of knowledge of good and evil for instance translated into consummating bait that was irresistible to Eve. It's pleasantness to the eyes (physical beauty) backed by a seemingly simple, but highly persuasive and beautiful argument from Satan, that it can make one wise (abstract beauty) proved too powerful for her. It overwhelmed her and she capitulated. Similarly, the physical sensuality of Bathsheba ignited a flaming passion that shattered every conviction and the spiritual cloak of David.

The beauty (abstract) in the argument as manifested in the reasonableness and logicality of the conspiracy to enslave the Jews by the Pharaoh who didn't know Joseph, made the Egyptians subscribe to it. It succeeded in portraying the Jews as a potential threat to the Egyptians who must be checked. And just who would fold his hands and watch his act of benevolence turn into his waterloo? No sane person!

Every false belief, every false doctrine, false practice or superstition therefore succeeds, because of the sound logic and the sophistication of the argument upon which it is founded, complemented by general human indolence and his conformist tendency, which keep the otherwise creative mind in a perpetual state of inertia. Though deeply rooted and with long years of existence, at the appearance of TRUTH, they all crumble like a pack of cards.

Time was, for instance, when the world was believed to be flat. Time was when twins were held to be evil in various parts of the world. Even the atom was once believed to be the smallest particle. But were these beliefs correct just because people subscribed to them in those times of ignorance? People believe falsehood. People believe fiction. People believe folklore. And their lives were influenced and ruled by these beliefs. But these are the simples. For it is written "The simple believeth every word:..." Prov;14:15. Yes, the simple believe EVERYTHING! They seek no knowledge, hoping that their heart may discover itself.

Falsehood therefore succeeds because people are generally simplistic and conforming. Having chosen to consign themselves to intellectual and spiritual lethargy, they become victims of their own decision.

Consequent upon this, the futility of Christianity finds expression in the agonies and frustration of believers' inability to activate the power in the word of God, thereby creating serious doubt about truthfulness and the potency of these words.

Against the backdrop of glamour of sin, the satire x-rays the subtle but persistent manner the enemy often adopt to manipulate the human ego, the human passion and the intellect to plan his attack in this merciless game of death, as man succumbs to his thrilling and highly captivating whims and antics in pursuit of the ever-illusive life of luxury, fame, power, sensuality and scholastic excellence, all together known as the pleasures of life, at the expense of his soul.

Chidozie was born in Ogidi Anambra State of Nigeria, during the Country's civil war. Though born into a Christian family, he grew up without a practical Christian background, (as the family was not particularly a religious one) but has always had instinctive perception of the Church as a world of spiritual and moral uprightness.

This consciousness rather than bring him close his natural faith, ironically drove him farther from any spiritual involvement as he considered himself unfit for such a pious environment. In 1999 however, he consciously and formally embraced the Christian faith in practical terms. Impelled by what he considers a brazen and mischievous pervasion of the spirit of the WORD for the secondary purpose of personal aggrandizement, and a primary purpose of destruction of the vineyard of God, he chose to fight this deadly scourge from a an angle that will afford a very wide outreach.