Danger in the Clouds

The Life Story of a Pioneer Pilot, Joe Donnellan 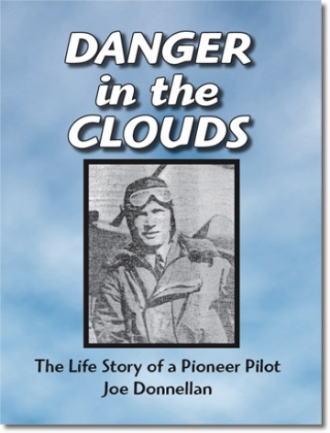 Danger in the Clouds starts out when Joe Donnellan is 13 years old. The book continues to move, chapter by chapter, through Joe's exciting true-life story. It tells how Joe tried to enlist as a pilot for the U.S. Army Air Force during WW1 at the age of 16. Joe was turned down, so he joined the Royal Canadian Air Force and flew for them till the end of WW1. Joe was discharged with the rank of Captain. Joe was now 18 years old and decided to buy a war surplus "Jenny" and became a "flying barnstormer" in Michigan, Indiana and Illinois.

Joe becomes a mail pilot, in between some various other commercial flying ventures, and has a very harrowing adventure when he is forced to land on the ice in Lake Michigan.

Joe continued his involvement into commercial aviation ventures with a major attempt to establish commercial air routes from Chicago to South America. Joe made a flight from Chicago, through major cities in the U.S., all the way to Cuba, in an effort to establish working relationships with mayors and influential people who could set up proper airports for commercial traffic.

Joe also conducted a few flying schools. Tragically, Joe was instructing one of his student pilots when, at the height of 300 ft over an airfield in Illinois, the student pilot "froze" at the stick and stalled the airplane, causing it to dive into the ground, killing both Joe and the student pilot. Joe was 29 years old!

My name is John Joseph Donnellan. Yes, I was given my middle name because of my Dad's love and respect for his older brother, Joe.

I started to investigate the Donnellan family genealogy in the year 1960, gathering information about our family members and tracing the family name back to 1400 AD in Ireland. As I started to uncover my Uncle Joe's flying exploits, I was amazed at the depth of his, day by day flying adventures. Oh, I had heard a lot of Joe's many accomplishments from my dad, aunts and uncles, but, until I personally found and read the many articles, news clips and saw the many pictures of Joe did I truly realize the importance of Joe's contribution to the emerging commercial aviation business in the 1920's. This is my compelling reason for becoming the author of Danger in the Clouds, so that I could put my Uncle Joe's life into a perspective for everyone to enjoy.