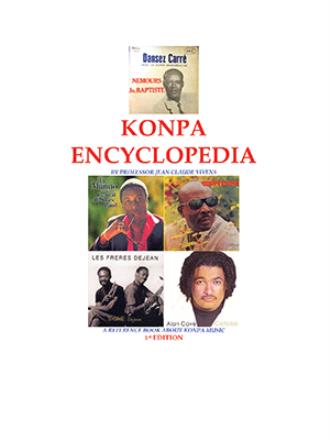 The Konpa Encyclopedia is a reference book that covers the history of Konpa music.
Readers will learn how the Konpa music started in 1955, the meaning of the word "KONPA", how Nemours Jean Baptiste created the formula, and the uniqueness of this genre of music.

The book will help you discover the great work of the Haitian musicians from the 1950s to this date.

If you are interested in knowing more about Konpa music, one of the most popular styles of music of the Caribbean, the "Konpa Encyclopedia" is a book that you must have in your collection.

Jean Claude Vivens is one of the best known Konpa show promoters in Washington D.C. and a media personality in the Haitian music industry. He is the producer of "Haiti A Suivre" the two times awarded Best International T.V. show in the state of Maryland. He is the cultural correspondent of "Radio Cara•bes" one of HaitiÕs most popular radio stations.

As a respected businessman, he has been on the Board of Directors of the following organizations: The Suburban Maryland Fair Housing, The Washington Association To Tend To The Concerns of Haitians, The Caribbean Band Leaders Association of Washington D.C., The Washington Carnival Haitian Participation Committee, and the city of Takoma Park Television Station.

Promoter/Producer/Musician/Radio & T.V. Personality/ Konpa Music Advocate /Writer on several Konpa websites and Master of Ceremony at many live shows, Jean Claude Vivens has, over the past 30 years, come in contact with more Haitian artists than most individuals, thus making him the best person to write the "Konpa Encyclopedia".