Coming Out Of the Republican Closet - Coming to terms with being black, patriotic and conservative 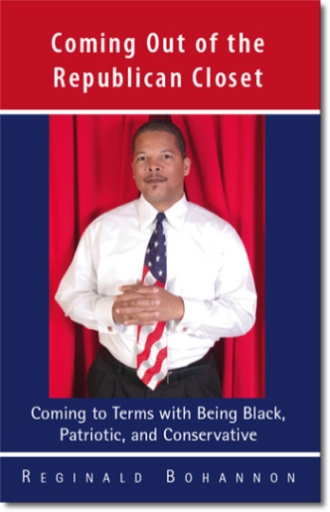 You've heard from the pros, pundits, and polemics. Now hear from one ordinary citizen, who discusses his transformation into a conservative voter.

This is the life story of a black man who grew up in a Democratic Party family in North Carolina. Reginald and his four siblings were raised by their mother, Margaret Bohannon. "As far back as I can remember," he says, "Mom has voted and worked for the Democratic Party. She has been an allegiant Democrat since the early 1960s."

After joining the United States Air Force in 1978, Reginald quickly rose through the ranks and earned a "Special Duty Assignment" to the Air Force One Presidential Wing under President Ronald Reagan. After returning to civilian life and volunteering with the Jesse Jackson presidential campaign, he became disgruntled with the Democratic Party. This led him to research both the Democratic and Republican parties.

This eye-opening book begins with an introduction, in which Reginald contemplates his evolution in politics. He went from not caring about politics at all, to taking a modicum of interest in his family's chosen party (Democratic), to asking himself whether he really was a liberal or a closet conservative who was just too embarrassed to admit it.

Reginald gives one important reason for writing this book: "I felt compelled to get my story out to the public," he says, "because I have come across quite a few people, particularly blacks, who have stories similar to mine but who, just like me, did not want to speak out because of the potential backlash. It was clear that if one of us were to write a book about our experiences, he or she surely would receive a lot of criticism. That being the case, I decided courageously to let it be me."

Reginald Bohannon, 45, was born and raised in Lexington, North Carolina, home of furniture making and great barbecue.
Reginald served seven years in the United States Air Force, including three at Little Rock Air Force Base in Arkansas. He quickly rose through the ranks and earned a "Special Duty Assignment" to the Air Force One Presidential Wing under President Ronald Reagan at Andrews Air Force Base in Maryland.
Reginald currently resides in Atlanta, Georgia. He is the father of a son, Reginald, Jr., and a daughter, Taylor.