Shadow of a Monster Plane 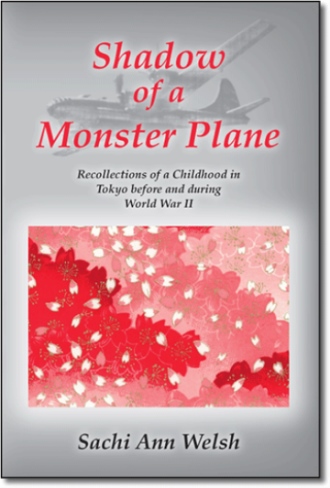 This collection of 19 short stories is a memoir of a simple middle-class life in Tokyo, Japan, that was turned into a harsh struggle for survival under air attacks by hordes of American bombers during the Second World War. Roughly covering the years of 1939 to 1945 and chronologically arranged, the author's childhood, approximately from age eight to fourteen, is told in her recollection.

The stories begin with a present day occurrence, which evoke thoughts of what she's experienced in some related situations in wartime long ago. A few of these stories are based on the everyday life of still peaceful prewar days, which within a short few years turns so chaotic and life threatening.

Sachi Ann Welsh was born in 1931 and raised in Tokyo, Japan. After college, she worked for American news organizations and the U.S. Information Agency at the American Embassy before moving to the United States in 1957. While her three daughters were growing up, she studied at the University of Miami and later earned a Master's degree from Florida State University. In 1986, she was granted a Fulbright Scholarship to study further in Japan.

In Miami, she taught in the public school system as an award winning media specialist and foreign language teacher. She was the first Florida educator who began teaching Japanese language as a secondary school credit course. Before retiring in 1994, she completed designing and producing a series of audio-visual instructional programs of basic Japanese called "Ichiban." She moved to Tampa, Florida, to live near her children, and returned to teaching Japanese language and culture at two universities there for nine more years, finally ending her career in 2005. On the side, she has also worked as a translator and interpreter for several major companies for nearly 40 years.

Presently in her retirement in Tampa, the author keeps busy doing craftwork, painting, and writing. Most of all, she gets great satisfaction from being a volunteer in a statewide teachers organization as well as for the schools in the area.