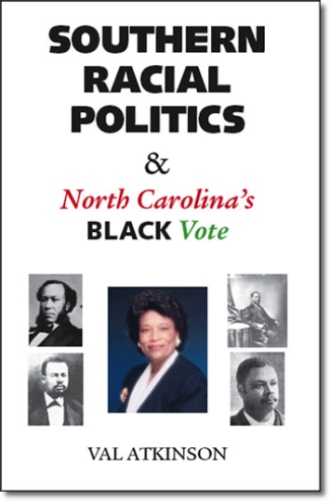 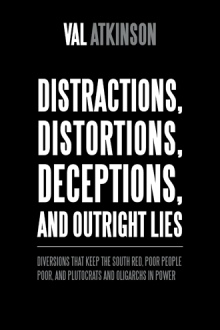 This book (my first book) has taken several twists and turns prior to production. The initial direction was blacks and politics in North Carolina; then it was the history of racism in the southern United States; and finally it was Southern Racial Politics and North Carolina's Black Vote- a convenient pairing of the former two.

Before my critics start ranting and raving about what seems to be repetitive and disjointed appointments, let me say what seems to be repetitive and disjointed is actually intended. I've known for some time that some readers of non-fiction are cherry pickers (they read chapter I and II but then skip to chapter VI or VII). And I've always wondered why writers don't give backgrounds and lead-ups to new chapters, topics and sub-topics. In this book you'll find that I've given considerable attention to the foundation of materials as well as the main content. And in many cases the foundation may be a repeat of an issue previously discussed. But this is my style and I hope you'll find comfort in it.

With all due respect to the nations' preeminent historians, John Hope Franklin, North Carolina History and Archives Director, Dr. Jeffery Crow and NC senior Appellate Court Judge James A. Wynn Jr., I have invested a considerable amount of time, energy and patience in laying the foundation for my version of the development of America's prejudices, biases and racism. Judge Wynn, in particular, tried to persuade me from historical discussions of antebellum and post civil war politics. But I felt that America's racism has become the common thread that has woven a quilt of mistrust, deception and outright lies in national state and local politics- especially in the South. And it needed exploring.

The "beginning" is a wonderful place to start. In Part I (the Beginning) an attempt is made to outline the circumstance that led to the development of notions of racism and bigotry, and how unscrupulous politicians used the publics' propensity for both to gain political advantage. In many historical accounts of blacks in America the American Civil War is a centerpiece and hub for documentation, speculation and d justification of positions. The Civil War is therefore discussed from a perspective of the black man- the reasons for the war, and blacks- service during the war. The core of this book really begins with Reconstruction and blacks- newfound freedom, elected officials, Party affiliation, and voter rights protection. The end of Reconstruction is when the ugliness began. Many Southern whites saw this as a time to put blacks back in their places and they produced groups and organizations to ensure that the white man was restored to his "rightful" position of racial superiority. This was a time of Race Riots, Black Codes, Lynching and Jim Crow.

The later half of the twentieth century was the start of real political and social gains for blacks in America; and by the end of the 20th century blacks has gone through a political metamorphosis, moving from the Party of Lincoln to the Party that Lynched and enslaved them- the Democratic Party. The impact of the saga of "trading places" between the Democratic and Republican Parties still lingers today. And although the number of black elected officials is at an all time high and blacks have attained very high appointed offices, there are forces that would intimidate black voters, disenfranchise black voters and even steal elections form black and white voters all in the name of politics and winning elections.

I am a native North Carolina, born in Johnston County. My formative years were spent in the Tidewater area of Virginia. After completing secondary school in Portsmouth, Virginia I attended Norfolk State University. My military career was lengthy- 20 years. After retiring from the military I returned to North Carolina to begin my second career. I became involved in talk radio in 1990; (I currently host a weekend talk show for Radio One of Raleigh)> I started writing for black newspapers in 1997 and began my teaching career in 1984 at Webster University.

After teaching at Webster I also taught at Durham Technical Community College and Wake Technical College. My latest teaching experience has carried me to North Carolina Central University where I teach in the Political Science Department. My primary subjects are Media Politics and Introduction to National Government.

I received my bachelor's degree in Psychology for Columbia College; my graduate degree form Central Michigan University was in Management and Supervision and I did my post graduate studies in Public Administrative at North Carolina Central University.

I am married with four children; Harold V. Atkinson, Cheryl E. Atkinson of Portsmouth Virginia, J'ne D. Atkinson of Baltimore, Maryland and Johnson L. Atkinson, undergraduate student at the University of North Carolina at Charlotte. I am an avid golfer (no, a golf nut!), I belong to a double deck pinochle club and I am a proud life member of Kappa Alpha Psi Fraternity Inc.