When You Hear The Bugle Call

Battling PTSD and the Unraveling of the American Conscience 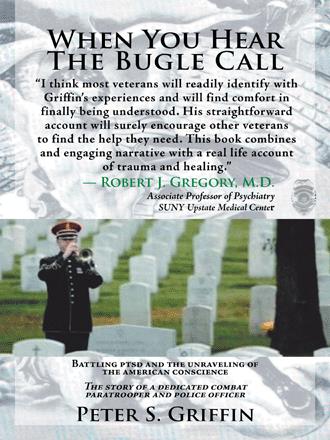 When You Hear The Bugle Call subtitled, “Battling PTSD and the Unraveling of the American Conscience” is a compelling, poignant and straightforward presentation of sickness and healing, righteousness opposing wrong doing, and the eventual triumph of the human spirit despite overwhelming obstacles and barriers. This very personal account of war and its aftermath was written to benefit combat veterans agonized by severe and chronic Post Traumatic Stress Disorder (PTSD), composed by one who is living the nightmare, one of their own, a fellow warrior. In the broader scope, this account is meant to help them, and their friends and loved ones to better understand this overwhelming psychological, involuntary, and innate response to continual, life threatening situations. This book will bring them to the realization that they are not alone in their sufferings, help is as close as the nearest Veterans Administration Medical Center and any caring individual who has read and benefited from the pages of this presentation.

Furthermore, it is meant to assist, comfort, understand and equally as important, accept those who gave their best to defend and protect us. It’s not only the GI I am talking about but also the police officer, the fireman, and the rescue personnel… all those who are “damned if they do and damned if they don’t!” All the brave men and women who place their lives in jeopardy, everyday, for the sake of others… for the sake of something bigger than self! This presentation addresses every symptom, obstacle or negative circumstance a PTSD victim will likely experience or encounter, and must overcome, if he or she expects some semblance of peace, love, success, respect, and dignity in their lives!

Victims of terror and natural disasters will benefit from this writing as well. In my opinion there is little, if any, significant difference between combat PTSD and PTSD manifested as a result of traumatic events that occur in the “civilian” world.

This work is not an ordinary, run of the mill “shoot ‘em up” military memoir! PTSD negatively impacts every interpersonal relationship! This book clearly and frankly relates, in vivid detail, how PTSD affects victims in the work place and social settings. In today’s fast paced, very competitive, high stress work-a-day world virtually every victim’s well being, employment and/or career is at risk. There are no immunities or safe harbors! This account addresses those many complex issues and more! All who read this narrative will profit from its message! Spouses, grown children, friends, relatives, employers, supervisors, human resource managers, co-workers and the general public will benefit from first hand knowledge and look with newfound compassion and understanding on those who defend(ed) their life, limbs and freedoms on a daily basis.

Peter S. Griffin, "Grif" enlisted in the U.S. Army on 13 March 1964 and was honorably discharged on 10 March 1967. His unit assignments were Company A, 2/502nd Infantry, 101st Airborne Division and Company C, 2/505th Infantry, 82nd Airborne Division. On Memorial Day weekend, 1998, he was inducted into the 502nd Infantry Distinguished Members of the Regiment, Halls of Fame, in a ceremony at Ft. Campbell, Kentucky. He served on the 101st Airborne Association, Fort Campbell, Kentucky Monument Committee, helping to establish a Division Monument to honor all Screaming Eagles, past, present and future. He is a "Boat Person", arriving in Viet Nam on board the "U.S.N.S. GENERAL LEROY ELTINGE", 29 July 1965. (The 1st Brigade of the 101st Airborne operated separately until 1968, when the rest of the division arrived. It was the last all paratrooper unit of the 101st to engage an enemy on the battlefield.)

After discharge he attended the Police Academy at Syracuse, New York and served as a Police Officer in Oswego, New York from 1968-78. He also attended the State University of New York (SUNY) @ Oswego, completing several public justice, psychology, sociology and civil liberty courses.

His military decorations include: the Viet Nam Service Medal with two bronze battle stars, the Silver Star Medal, the Army Commendation Medal, the Good Conduct Medal, the Republic of Viet Nam Campaign Medal with device (1960), the Republic of Viet Nam Cross of Gallantry with Palm, the Presidential Unit Citation with Oak Leaf Cluster, the Valorous Unit Citation, the Meritorious Unit Citation, the Parachute Badge, the Army Republic of Vietnam Paratrooper Badge, the Combat Infantryman Badge, the Recondo Patch, the National Defense Service Medal and the Expert Rifleman Badge. He recently received the Conspicuous Service Star with three accoutrements and the Conspicuous Service Cross from the Governor of the State of New York for his patriotic service.

"Grif" married Brenda Gibson in 1967. They are blessed with daughter Pamela, and son, Brent. They are the proud grandparents of three lovely granddaughters Emilie, Meaghan, and Georgia, as well as grandson, Connor. Pete and Brenda have resided in The Great State of North Carolina for the past 28 years.

"Grif" enjoys helping other disabled veterans and their loved ones. His interests include American history - especially the Civil War, collecting antiques, refinishing old furniture, spending time with his dogs, mountain trout fishing, writing, maintaining his website (“Griffin’s Lair”) and coin collecting. He published a poetry anthology, Thoughts, Memories and Tears, in 1999. His writings have appeared in several military magazines and newspapers including "The Screaming Eagle", "The First Screaming Eagles In Vietnam", "The Airborne Quarterly" and the "101st Airborne" (2nd edition) by Turner Publishing Company.