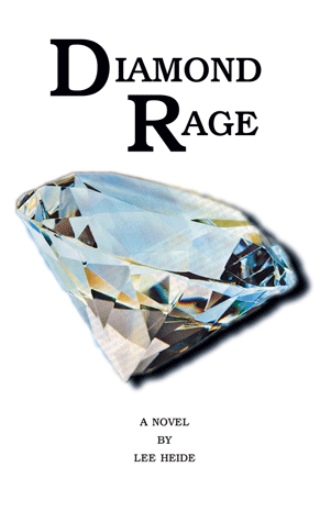 The novel is set in Yellowknife in 1995 and the diamond fields in the NWT in 1995. The city is diamond-mad. The large mine at Ekati is nearing competition and dozens of persecutors are in the field. Everyone had friends or relatives in the field, or had just returned themselves, and everyone thought that they had the inside story.

David Baxter, a Yellowknife citizen, flies a B-737 for Canada North. He shares a condo with his girlfriend, Marie Alden, who works in a Cutting Plant where diamonds are cut, shaped and polished. When his father dies David helps his mother with a huge sale prior to selling the family home. Below a workbench he discovers a tin box with his grandfather's flying stuff - he was a bush pilot - including a log of flights. The log is quoted in full. The last entry describes taking, and bringing out, a prospector from a northern lake where he had found diamond indicators.

Baxter discovers that no claim had ever been filed around the lake. He hires a prospector for two summer months to file the claims. In the winter, Baxter raises money via a share offering for the next summer's work.

Walter Johnson, from Hamilton, is an ex-military M.P. with an unsavory background. He is hired by De Beers of London Security division to go to Sierra Leone to buy diamonds. After some time there he gets malaria and is sent to a sanitarium in Alberta to recover. Then he is sent to Yellowknife to open an office for De Beers. Baxter's activities come to his attention and he is determined to acquire the claim at lake Pellatt for De Beers.

When Baxter's prospector retunes to Yellowknife for the next summer his is murdered by Johnson, without the consent of De Beers in London. Marie, n the Internet, finds another prospector who takes a team to the lake. The rogue agent tries to sabotage the helicopter taking a drill rig to the claim by placing a bomb on board. The attempt fails.

The drilling at Lake Pellatt is showing strong signs of diamonds. Still determined to sabotage the operation, Johnson tries to destroy the drill rig at the claim. This attempt fails.

The drilling continues and Kimberlite chutes are found; the site is rich in diamonds.

Raised in Vancouver, Lee Heide joined the RCAF in 1941 and trained as a navigator. Sent overseas, he was trained on Beaufort torpedo bombers. With a crew, he survived a year of the blitz on Malta and then converted to Beaufighters. He was twice posted as 'Missing in Action'. Shot down the first time, he and his pilot spent five days in a dinghy and washed ashore on Elba, which was German occupied. Evading capture, they got a small boat and saled to Corsica. After a short rest on Cyprus, Lee returned to operations and was again shot down. he nad his pilot force-landed in Turkey where they were interned. He was awarded a DFC for his exploits