The Ancient Chronicles of the Red Dawn Tribe 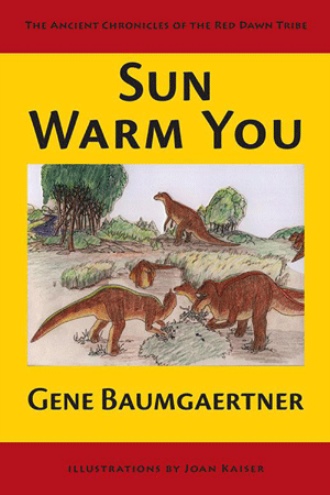 STORYLINE: The story is about a clan of The People, or hornbrows, as they refer to themselves. The clan is making its annual trek, along with the rest of a great herd, to the ancient nesting grounds. Along the way, two of the main characters get split off from the herd during an attack by a tyrannosaur-like predator.

What follows is a series of adventures by characters remaining with the herd, and those forced to deal with the dangers of traveling without the protection of the herd. The former takes the reader through herd socialization, dominance fighting, nest-building, and the feeding and protection of the young. All of this moves through the actions and intrigues of several prominent characters: Grendaar the Groundshaker, the aging clan-leader, who must fight to retain his position and his life-long consort, the eternally beautiful Tessah the Wise ... Dandraar, the irrepressible youth, who half the time is engaged in adventures with his friends, and the other half is trying to find sense in the actions of adults ... and Adeldraar, highly placed leader of the herd, and sworn enemy of Grendaar's ...

Add to this the adventures of a young pair trying to survive beyond the herd, while at the same time coping with the changes brought about by imminent adulthood. This part of the story follows several other main characters: Panthrar the Swift, the valiant and handsome adolescent, maturing to adulthood ... Pippit the True, the comely, budding young female who accidently gets thrown together with Panthrar ... Red-patch, the dreadrunner, a vicious tyrannosaur-like creature ... Thundermaker, the threehorn, the indomitable leader of a herd of Triceratops that fate throws the way of the young hornbrows ... and Savage, the dreadcharger, and his troop of deadly and relentless Tyrannosaurs. The story unfolds as Panthrar and Pippit constantly try to evade death, yet find time to fall in love, cope with nesting, and raise a brood of hatchlings in an often strange, and frequently hostile environment.

The book comes complete with graphics, maps, and appendices. The appendices describe the characters, provide a glossary of terms, provide insight about the inhabitants of late Cretaceous North America, and elaborate on the setting for the story.

ADDITIONAL BACKGROUND: Paleontological research and findings over the several decades have changed our perspective of what we know, and what we think we know, about dinosaurs. For example, it is pretty well established that at least some types of herbivorous dinosaurs (notably hadrosaurs and ceratopsians) traveled together in large herds, herds sometimes exceeding ten thousand individuals. And since they traveled in large groups, then it might be reasonable to expect that they developed a heightened social awareness. In other words, they would have developed some form of social structure, a hierarchy, or pecking order. They would have some form of communication, to protect territory, to signal if a predator threatened the herd, to make other simple wants known, and possibly for more complex purposes.

It has also been discovered that more than one form of dinosaur nested in colonies. This is a not-too-surprising extension of the socialization of the herd. Along with these findings, it has been determined that many dinosaurs built nests, and that at least some of them tended the eggs in the nests, and fed and protected the young after they hatched. Some hatchling hadrosaurs were completely helpless for weeks after hatching, and someone, likely the mother and/or the father, had to gather food for them, and keep predators away from the nest. These were remarkable discoveries: socializing, nesting in colonies, and parenting.

Other findings are still being hotly debated, although the general consensus is that dinosaurs were not stupid, sluggish, cold-blooded, and doomed to extinction. Were at least some dinosaurs warm-blooded? Were many dinosaurs swift and alert?

Dinosaurs survived for over 140 million years (compared to a few million years for human-like creatures), and suppressed the development of mammals during that entire period. It was only after dinosaurs ceased to be, that mammals inherited the earth. A hundred and forty million years is a long time - so they were doing something right.

ABOUT THE AUTHOR: Gene Baumgaertner holds two engineering degrees from the University of Maryland. He has worked in transportation for over 30 years as a Professional Engineer, and is a former Ronald Reagan presidential appointee. But his interests are many and varied. In addition to this well-researched novel on dinosaurs, he has also written a reference work about the twentieth century, and two history books about fifteenth century England. He is presently working on a historical novel about the Wars of the Roses, and a quasi-autobiographical book about growing up in the second half of the twentieth century. He was lived in Kentucky, New York, Maryland, and Georgia. He presently lives in Raleigh, North Carolina with his lovely wife, Kathy.

ABOUT THE ILLUSTRATOR: After an early life in chilly upstate New York, Joan Kaiser has spent much of her adulthood enjoying the balmy North Carolina coast. She lives in Wilmington, North Carolina with her husband, Jerry. Here she raised two children, provided for husband and home, and worked in administration in a local hospital. Along the way, she also has illustrated several books, produced copious artwork for family and friends, and now looks forward to the enjoying the peaceful creativity of retirement.