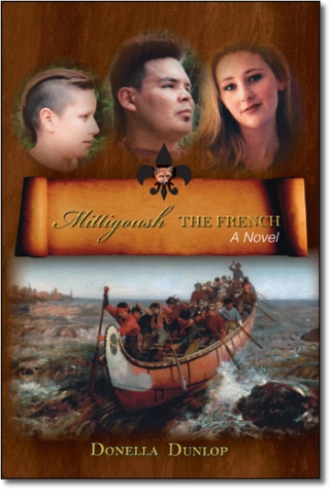 Twen, consummate warrior of the Ottawa Valley Algonkin, is torn between his devotion to his people, love of his Valley, and an offer to accompany the charismatic explorer, Champlain. Should he choose the musket or the axe of his childhood going apart dream? For a time Twen follows the Mittigoush, the French. And returns to his Valley home to find his family murdered or captured by Mohawk Adders.

A gallant foray with Piskaret, famed Algonkin warrior, rescues some of Twen's clan but the Iroquois Adders are too strong. Twen's beloved Valley is raped first by the Adders and then by French voyageurs hungry for beaver pelts.

Refuge offered Twen and the remnants of his clan by valourous French missionaries at Ville Marie leads to a new allegiance. He admires their bravery and their consummate faith. A habitant family, the Perraults, become his second family. He will love them, scout for them, and protect them as his own when the Adders come. Finally he watches in dismay as brash newcomers to the mission decide to ambush the Adder war parties at Long Sault.

Torn between two loves and two beliefs, will Twen sacrifice even his life for these Frenchmen?

And what of his progeny? When allegiance, even desire springs up between white and red, when persecution by newcomers fills Algonkin hearts with bitterness, will Twen's clan return to the Valley? And, if they do, will his People, his Valley accept the offspring of the Métis?

Donella Dunlop is a writer, volunteer, teacher, artist, globe-trotter, Donella Dunlop has lived in Ottawa, Calgary, British Columbia, Germany, and England, but her birthplace and her first love is the Ottawa Valley, Ontario. The Scots, Irish, Dutch, French, and Algonquin of the Valley are her family. Her great-grandparents helped settle the Valley, then a veritable wilderness. Their stories and her special affection for childhood Algonquin school friends inspired this novel, the third about her beloved Valley. The first was Menominee, the Wild River People, the second Sagganosh, the Britisher. Dunlop lives now in Manotick, Ontario, her family close by. She is at work on a fourth novel.