You've Got The Look

The Complete HOW TO Celebrity Look-Alike Guide 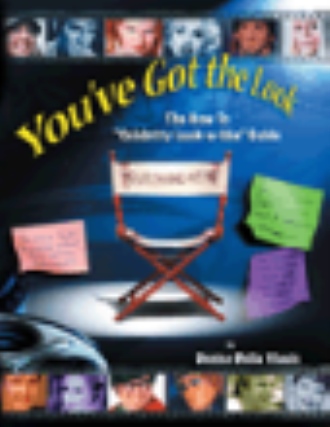 You've Got The Look is a valuable information and resource guide for anyone intersted in finding a creative second income in the entertainment field. Performers and non-performers alike will learn every detail needed on HOW TO break into the industry of entertainment, and how to secure a job working as a professional celebrity look-alike and Hollywood double. You've Got The Look features in-depth interviews and amazing advice from industry experts, booking agents, and working professionals. It contains over 100 booking agents contact information, as well as pages of valuable industry secrets and thought provoking advice to guide your every step. Learn Make-up/Costume tips, how to write your resume, make a contract, what to know about International travel, and so much more! If you look like, sounds like or can act like (with make-up and costumes) a well recognized celebrity- (or know someone who does) than this book is for you. The Author is a living example that resembling a celebrity has it's advantages!

Denise Bella Vlasis has been a performer for most of her life, starting with dance and theater classes at age nine. It was her first dance instructor who recognized Denise's natural abilities. Making sure Denise would continue her studies in dance classes, this very same teacher offered her free classes and encouraged her mother to make sure to "keep this one coming to class." The lessons paid off. Denise continued her studies in dance and theater all the way through college and was honored in 1981 and 1982 with scholarships in dance, theater, and choreography. While in college, Denise was actively pursuing a performing career, landing small roles on television and in music videos. In 1983, a brand new cable music television channel (MTV) was born, and suddenly the comparisons to Madonna began. Denise's similarities to superstar Madonna began to get her instant recognition each time she walked through the doors of an audition. Denise slowly realized that for most of her life she had been noticed by perfect strangers constantly telling her who they thought she looked like. In 1984, Denise decided to enter a look-alike contest at a local mall. That very same day, there was a television producer in the audience looking for a Madonna look-alike for the filming of a well-known morning television program. After seeing Denise in action (among hundreds of other girls), the producer hired Denise on the spot to film the television show the very next morning. After the filming of this show, the calls started coming in from agents and show producers inquiring about Denise's Madonna act. Rather than resist something that seemed to be destined, Denise allowed this new opportunity to unfold and take her life on a journey that her drama coaches and dance teachers could never have prepared her for. Endless job offers began to land at Denise's feet, and the many enthusiastic requests to book her Madonna act resulted in Denise's commitment to become a professional impersonator. Denise pursued impersonation with a focused, ambitious energy. While television and live show offers began to pour in for Denise, it would be her appearances for children and children's charities that would be an awakening for her. She quickly learned that this "star" element could be utilized to open hearts, and with respect to Madonna's image, Denise learned that she could "give back" in ways that changed her life and her focus forever. Her journey as Madonna began. In 1986, MTV held Madonna's "Make My Video" contest. Denise entered a video of herself as Madonna, which was handpicked by Madonna as a top-10 finalist out of roughly 2000 videos entered. Her video was then selected as first runner-up and she was the only celebrity look-alike impersonator to be chosen from all of the entries. Denise met Madonna shortly thereafter, and was inspired to continue her career as a celebrity double. She has since worked with Madonna on a commercial for MTV and was hired as a makeup and costume stand-in for Madonna's 2001 Drowned World Tour. Denise has appeared as Madonna on numerous prime-time television shows and networks, including A Current Affair, AM Los Angeles, Americas Funniest Videos, American Journal, Baywatch Nights, Days of Our Lives, Dream On, Entertainment Tonight, Extra, Family Feud, Hard Copy, Jenny Jones, Live with Regis and Kathie Lee, Mike and Matty, Maury Povich, Not Necessarily the News, Putting on the Hits, Philly After Midnight, The Gossip Show, The Carol Burnett Show, The Carol & Marilyn Show, The Tonight Show with Jay Leno, To Tell the Truth, USA High, Vicky Lawrence, the E-Channel, VH-1, MTV, HBO, MUCHMUSIC, and many more. She worked with film director John Boskovitch for a role in Sandra Bernhard's feature film Without You I'm Nothing, where Denise played the part of Shoshanna. She has traveled the world and been cast as a stand-in, voice-over, and featured entertainer for hundreds of national events. Her live show has even been requested and performed to rave reviews from Christina Aguilera, Seal, CEO executives, heads of corporations, and politicians. Denise is featured as Madonna in the books A Day in the Life of Hollywood, Encyclopedia Madonnica and Who's Not Who, as well as endless magazines, periodicals, and trade papers. She is considered an expert in the field of celebrity impersonation and is highly respected among her peers and within the industry. Denise has set a standard in the world of celebrity look-alikes. A pioneer, like the superstar she emulates, she has paved the way for countless other people to discover their own talents and abilities. What brings the most satisfaction to Denise's life is the opportunity to watch the people she has advised turn their hope into successful careers. Her sincere desire to help people is the motivating factor that led her to write this book. Denise hopes it will encourage readers to take the first step in reaching for their dreams.