One Gospel with Fulfilled Prophecies 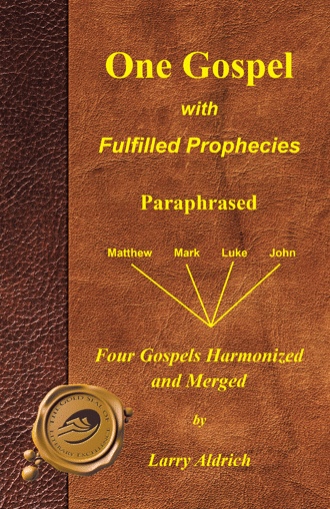 When the Governor was notified that Jesus was being brought back from the beating, Pilate said to the waiting Jews, “Listen to me. I will bring him out to you. But I still find no fault of any kind in him. Then Jesus slowly came out wearing the crown of thorns with the bloodied purple robe draped over him. As he came into full view of the roaring crowd below, Pilate said to them all, “Behold the man!” The mob quickly hushed to a dead silence as they looked at the bloody disfigured person being roughly pushed by the guards into their view. The people were so shocked at his appearance that the chief priests and officers had to lead the people back into a fervor, as they did the first time, by shouting, “Crucify him, crucify him!” Pilate angrily retorted, ”You take him and crucify him. I find no fault in him." The lawyers of the priests answered him, “We have a law, and by our law he should die, because he made himself the Son of God.” When they told Pilate that and he remembered what his wife had said, he became more afraid and careful. He left the Jews and took Jesus back into the Judgment Hall and spoke with him. “Where are you from?” But Jesus did not answer him. Pilate raised his voice and said, “You won’t speak to me? Do you not know that I am the one that has power over you to crucify you or the power to release you?” Jesus raised his eyes and said, “You would not have any power at all over me except that it is given to you from above: Therefore, the ones who turned me over to you have committed the greater sin.” From then on, Pilate worked hard to release Jesus, It was the preparation of the Passover and nearing nine o'clock AM when coming back to the porch above the Jews, he tried one last time to release him. But they cried out loudly, “Away with him. Carry him away and crucify him.” “Look, behold your King!” Pilate said, “Should I crucify your King?” The Jews shouted back, “If you let this man go, you are not a friend to Caesar because he tries to make himself a king over even Caesar.” “We have no king but Caesar,” the priests shouted. “Anyone who sides with a person who declares he is king, is a rebel against Caesar!” When Pilate heard that political threat he made his final choice to allow the Jews to have their way. He resolutely sat down on the Judgment seat on the platform that is above the area called the Stone Pavement which in Hebrew is Gabbatha. Pilate motioned for Jesus to be brought over to stand before him. Pilate Sits On His Judgment Seat Mt 27:31; Mk 15:20; Lu 23:32 Jn 19:16 Around 8:30 AM Then Pilate sentenced him to die as they demanded and turned him over to the contingent of Roman soldiers to be crucified. After they had mocked him, they yanked the robe from his bloody shoulders and back. They redressed him in his own clothes, turned him around and led him out to be crucified. Two others, both criminals were led out to be executed with him. To Golgotha and the Crucifixion Mt 27:32; Mk 15:21; Lk 23:26; Jn 19:17 As they led him along, he carried his cross toward the place resembling a skull called in Hebrew, Golgotha. As they continued toward Golgotha, because of the weakened condition of Jesus. the soldiers looked and found a man to carry his cross. The soldiers grabbed Simon, a Cyrenian, the father of Alexander and Rufus, as he was going in the opposite direction toward the city of Jerusalem. They turned him around, put the cross of Jesus on his shoulders, and forced him to carry the cross behind Jesus. So Simon began following in his footsteps. NOTE: This does not show up the Prophecy Boxes which are a key important part of the book's purpose.

After three years of work, how did I arrive at this finished book? I wanted to simply merge the story of Jesus into one easy-to-read book rather than the four Gospels and to include Old Testament Messianic prophecies which Jesus fulfilled showing that he was the Messiah.

Biblical prophecy has always been fascinating to Larry Aldrich. He felt somewhat special in that he was born in 1947, the same year that the nation of Israel had been reborn by the charter from the United Nations. That was a fulfillment of the Prophet Jeremiah's prophecy of the dry bones coming back to life and was also related to Jesus' prophesy which stated, the generation that saw the fig tree (Israel) blossom would not pass away until all things had been accomplished. Larry was raised in a home where church life and the spiritual life were always emphasized and important. He was taught that man is on the earth to praise and edify God. So the order of importance for him was God, family and school. Even at an early age, he prayed for a Christian wife because he was aware that prayer affects things. It was at Lee College that Larry met his future wife, Brenda Ridgeway. Even before they started dating, he knew she was to be his wife. While there, he was the Associate Editor of the yearbook in his sophomore year, Editor of the College newspaper in his junior year and played on the golf team. After graduating with a B.A. in Business Administration and a double minor in Religious Studies and Elementary Education, Larry moved to South Carolina, married Brenda, and worked as a math teacher while earning an M. Ed. Degree and a Specialist Degree from the University of South Carolina. Later, he worked as a public school principal for thirteen years before changing careers to designing and building houses. After ten years of marriage, Tracie was born into their family followed by Kellie and Kenny. They now have six grandchildren and have been married for forty-two years. In showing his continued interest in the subject of end-time prophecies and Israel, Larry has watched documentaries, and attended lectures and conferences on the subject. He has read and collected so many books that he now has over 1,300 in his personal library. Larry and Brenda have also traveled to Israel and Egypt following the footprints of Jesus whom he has studied all his life. Like all who serve the Lord, circumstances get our attention so that we can become more like Christ. The same is true of Larry. Recently he had a traumatic experience, which awakened him to make Jesus the Lord of his life: "I have lived through six different near-death accidents in which death was only a millisecond away, and yet what have I done to redeem those 'life ending' events ... I thought of all the wasted years, wasted money, and wasted efforts on foolish thoughts, projects and my work." Through it all, God gave him a cause for living and thankfulness for God's grace. “God has given me the deep, driving urgency to write this book.” When Christ provides the move in a certain direction, it becomes a spiritual compulsion, an urgent drive like 'hot embers in my bones', as Jeremiah says, and comes from the innermost parts of the soul. When it is accomplished, one feels as Paul says, “a race well run.” Larry believes that, if a person can accomplish the call on his life that promotes the Kingdom and helps others find Christ, it makes his life worthwhile. Authoring The One Gospel with Fulfilled Prophecies, is the result of that compelling cause which God put into Larry's heart.