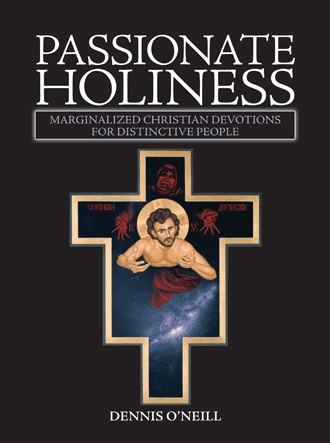 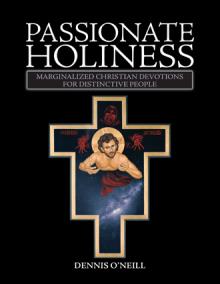 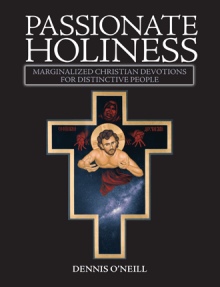 Archbishop Desmond Tutu of Cape Town once said with regard to South Africa's Apartheid policy, "One of the ways of helping to destroy a people is to tell them that they don't have a history, that they have no roots." He recently described homophobic discrimination "as totally unacceptable and unjust as Apartheid ever was." Unfortunately, it has been particularly difficult for some gay, lesbian, bisexual, and transgendered Christians to remain connected with and identified with their own faith traditions because some of these traditions not only treat them as people of secondary status but teach Christian history as though no people of same-gender attraction or opposite-gender identity had any noteworthy place in it and had made no significant contributions at all to Christian tradition.Passionate Holiness tries to remedy this situation by explaining why acquaintance with the stories of Sts. Polyeuct and Nearchus, Sts. Sergius and Bacchus, Christ/Holy Wisdom, Sts. Matrona, Perpetua and Felicity, Brigid and Darlughdach, and many others with whom gender minorities can identify can help them to connect with their own history and spiritual legacy and empower them to face a brighter future with a sense of optimism and inclusion. The story of the removal of the feast of Sts. Sergius and Bacchus from the liturgical calendar of the Roman Catholic Church in 1969 - ironically, the very year New York's Stonewall Riots launched the gay liberation movement - is a particularly revealing example of how far some religious authorities will go to keep gender minorities distanced from their own history.

This is all explored in Passionate Holiness.

"Many thanks for sending me your book Passionate Holiness, which I enjoyed very much. It is a fascinating account of the cult of Holy Wisdom, mixed with stories of various 'distinctive people' and the roles they have played in the history of the Church. It is full of saints, sinners, heretics, martyrs, and those who persecuted them. Some of these people, and the ideas they believed in, have featured in my novels, though there was much that I was not aware of. The material in the Russian and Irish chapters were new to me. You say at the beginning of Chapter VII that the reader may cry out "Too much information". Not me! Passionate Holiness is a work of remarkable scholarship, and I wish it had been published before I wrote my Byzantine novels, rather than afterwards. If I ever return to Byzantium as a subject, I am sure I will find your book invaluable. The icons that illustrate the book are beautiful. You are lucky to have access to works by such gifted artists. If only my publisher had commissioned something similar for the cover of Theodore. Maybe next time!"
Christopher Harris English novelist, author of "Theodore," "Memoirs of a Byzantine Eunuch," and "False Ambassador"

"Here's something the antigay modern Roman Catholic Church would like to forget: In the early years of Christianity, homosexual saints were worshipped too, as Dennis O'Neill reminds us. O'Neill is a Chicago-based Catholic pastor who 11 years ago founded The Living Circle, a spirituality center devoted to GLBT people and their friends. In 1995 the Circle hosted an art exhibit entitled "Passionate Holiness" that displayed such holy icons as Saint Boris and George the Hungarian and Saints Brigid and Darlughdach of Kildare. O'Neill's retelling of such stories, plus striking color illustrations, will surprise and inspire any reader, gay or not."
Anne Stockwell Review from "The Advocate", May 24, 2005 issue, p. 82.

"Passionate Holiness is indeed a remarkable book, unlike any other that I know of. Its scope is amazing in its extent, both geographically and chronologically. Much of the subject matter is unfamiliar to theological historians, and it all needs to be generally known. The book gives historical meaning not only to numerous examples of all-male and all-female pairs of lovers, but also the details of the periods in which they lived and of their subsequent cults. In my own specialty, Russian literature and history, the book shows enormous erudition and a secure command of the material."
Simon Karlinsky Professor Emeritus of the Department of Slavic Languages and Literature at the University of California, Berkeley

"I read Passionate Holiness with great interest. I am amazed by the scope and depth of the work, moved by the faith that motivates it. I am so thrilled to know more about The Living Circle (described in the book) as it seems a unique and effective ecumenical group."
Mary E. Hunt Ph.D. a feminist theologian and author of many books, who is co-founder and co-director of the Women's Alliance for Theology, Ethics, and Ritual (WATER) in Silver Spring, Maryland. A Roman Catholic active in the women-church movement, she lectures and writes on theology and ethics with particular attention to liberation issues.

"Passionate Holiness is a feast for the mind, the eyes, and the soul. Dennis O'Neill reclaims the many queer treasures that lie buried in Christian history. With impressive depth of scholarship, he traces Christ's feminine incarnation as Holy Wisdom. He details the stories of a bisexual martyr, cross-dressing nuns, saints who ministered in same-sex pairs, and other people of faith who lived outside gender norms. As O'Neill writes in the text, "When history reads like this, who prefers soap operas?" Color illustrations of contemporary icons bring the text to life. This book makes an important contribution to expanding human understanding of Christ and the saints who follow Her/Him."
Rev. Kittredge Cherry author of "Hide and Speak", "Womansword", "Equal Rites: Lesbian and Gay Worship, ceremonies, and Celebrations", "Jesus in Love", and "Art that Dares"

"Passionate Holiness is one of the most beautiful books I have ever seen."
Thomas Moore a leading lecturer and writer in North America and Europe in the areas of archetypal psychology, mythology, and the imagination. He is the author of "Care of the Soul", "Soul Mates", Rituals of the Imagination", "The Planets Within", and "Dark Eros".

This is all explored in Passionate Holiness

Dennis O'Neill was born in Chicago, Illinois, in 1947. He received his education in the seminary system of the Catholic Archdiocese of Chicago and was ordained a priest in 1973. He graduated with a Bachelors Degree in English Literature from Loyola Universtiy in 1969 and a Masters of Divinity from St. Mary of the Lake Seminary, Mundelein, Illinois, in 1973. In 1974, he received an S.T.B and an S.T.L. from St. Mary of the Lake Seminary. Since ordination, he has served in four parishes in Chicago and is currently pastor of St. Martha Parish, in Morton Grove, Illinois. He is author of Lazarus Interlude: A Story of God's Love in a Moment of Ministry (Notre Dame, IN: Ave Maria Press, 1982). And he has written either the introductions of the texts for several books published by British Celtic Artist, Courtney Davis: the Introduction to Celtic Illumination: the Irish School New York: Thames & Hudson, 1998); co-authored St. Patrick: A Visual Celebration (London: Blandford, 1999); and Celtic Beasts (London: Blandford, 1999), and authored 101 Celtic Crosses (Newton Abbot, Devon: David & Charles, 2004).