When the Days Were Not Long Enough 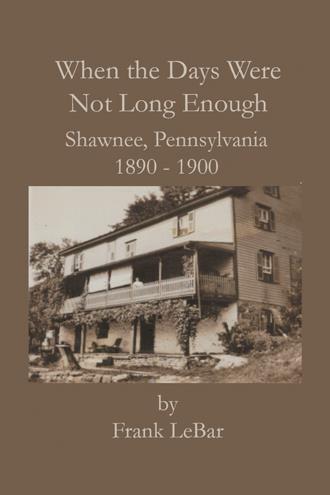 P>Frank LeBar recalls the richness of his boyhood, growing up in Shawnee, Pennsylvania (Shawnee-on-Delaware), at the turn of the century. Like many other families who were early settlers along the Delaware River, the LeBars combined farming with fishing, trapping, and lumbering in a traditional lifestyle sustained by hard work and the rich resources of the river itself. Frank's memoir encompasses a wide range of activities: his earliest memory of a barn-raising, the typical chores of a farm boy, and his experiences in the one-room Shawnee School. Although he is from a large family, Frank's particular companion is his older brother John, always ready for a practical joke or adventure. Together they delight in roaming the countryside, checking on traps, searching for Indian relics, or just "loafing." Together they also take a memorable raft ride down the Delaware to deliver lumber to the mills around Easton. In loving detail, Frank describes the village of Shawnee-on-Delaware and its inhabitants. His knowledge of people, land, and river is matched only by his abiding affection for his home.

The LeBars owned the Shawnee General Store, and so young Frank is also involved with commercial enterprises perhaps less typical of a Pennsylvania farm boy. Family efforts on the farm were on a large scale partly to supply the store, which served as a hub for community social and economic activities. Frank was in a unique position to observe both his neighbors and the increasing numbers of city people, from New York and other areas of the eastern seaboard, as they first began to explore this Pocono Mountain and Delaware Water Gap region on vacation excursions.

In 1903, a disastrous flood wipes out the family farm and the LeBar family fortunes change. Frank now strikes out on his own, and boyhood energy becomes a young man's ambition. As he tries his hand at numerous pursuits: teaching, banking, lumbering, feed and grain, and real estate--Frank paints a broad view of enterprise in the region, and his story has now expanded to include Stroudsburg as well as Shawnee. Frank's personal development reflects larger social changes. With the coming of the automobile, and the enterpreneurial activities of C.C. Worthington, the region is transformed into the center of tourism that it remains today.

Frank LeBar (1884-1970) lived in Stroudsburg, Pennsylvania, for most of his adult life, working primarily in the real estate business. The editor of this memoir is his only son, Frank M. LeBar (1920- ), a retired anthropologist living in upstate New York and the author of several publications on Southeast Asia..