i missed me after the terror, during the years of unbearable sorrow: 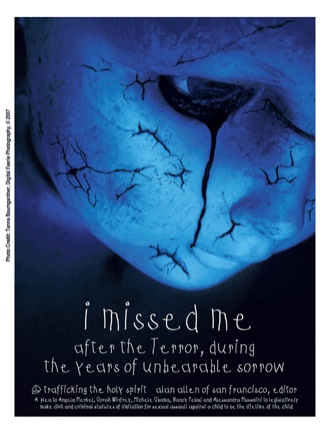 (Spring 2010) Local parents warned about priests and nuns who gang rape and prostitute kids, tweens & teens in directory of clergy perps & pervs in your neighborhood.

i missed me after the terror, during the years of unbearable sorrow: trafficking the holy Spirit includes oral journalism of adults raped as kids and a parental directory of priests and nuns who gang rape and prostitute kids, tweens and teens.

An appendix, Where are the Children of Table 34?, exposes a study of the ‘scientifically established’ orgasm rates of infants, toddlers, preschool children, kids, tweens and teens cited in proponing today's standards of sex education in the classroom for kids too young to be exposed to sex education and helped set statutes of limitation for rape of women (there had been none) and the shift from rapists being guilty to women having to prove they didn't want to be raped. It likely influenced setting statutes of limitation for clergy crimes of sexual assault of kids, tweens and teens. It has come to light ‘scientists using stopwatches’ to document ‘scientific studies’ – now used to justify premature sexual education of elementary school-aged kids, were conducted by child rapists and child murderers. That is one reason statutes should be removed, or extended to the life of the child, or ‘windowed’, since the ‘objective studies’ were done by perps and pervs.

Another reason is, the psychiatric record establishes kids, tweens and teens sexually abused often commit suicide or repress the events for 20-30 years in order to not go crazy. They consequently make bad choices and live sad lives that never would have been, if they had not been sexually molested, assaulted, raped, serially raped, gang raped, prostituted and/or ritually abused.

ABOUT THE AUTHOR & THE PHOTOGRAPHER

ABOUT THE AUTHOR & THE PHOTOGRAPHER